Many vegans excel at cutting out animal products from what they eat but they often get blindsided by beverages, particularly alcoholic drinks.

This is especially true with vodka because not all distillers disclose their ingredients. It makes one wonder if vodka is actually vegan. I did the research, and here’s what I found!

If you want to learn more about vegan vodkas, whether flavored vodkas are vegan, and if your favorite vodka brands are vegan, keep on reading!

Is Vodka Vegan And Gluten-Free?

Most vodkas are both vegan and gluten-free because traditional vodka production doesn’t use animal products, and grain-based vodkas usually have no traces of gluten once bottled.

That said, there are vodka brands that claim to be vegan but are not certified, meaning their products have not been tested by the appropriate organizations.

As a result, factors like an animal bone being used as charcoal for filtering the vodka might be overlooked, making their vodka vegan based only on the vodka itself.

Likewise, vodka that contains no animal products but is tested on animals in any way is not considered vegan.

In addition, most vodkas are considered gluten-free but not all brands are certified, which is why it’s important for celiacs to stick with certified brands like Tito’s Handmade Vodka.

There are some flavored vodkas that are vegan, and some that aren’t. It all boils down to whether or not the additives used to flavor the vodka are animal products.

Additionally, if the process of making the vodka requires animal bones or animal testing in any way, it cannot be considered vegan.

To find out whether a flavored vodka is non-vegan, refer to this list for the most commonly used animal products or by-products in vodkas:

Is Vodka Made From Animals?

Traditionally, vodka is made with agricultural products like wheat, rye, potatoes, and corn to create vodka, not animal products.

However, since vodka can be made from anything that contains sugar or starch, some distillers have used animal products as a base ingredient.

Most tonic water is vegan, meaning it’s possible to make vodka tonic that is free of animal products.

Generally, tonic water is made out of carbonated water, quinine, sweeteners, and flavorings like lemon. However, when the sweetener used is honey, the tonic water is no longer vegan.

Such is the case with Schweppes Indian Tonic Water which uses honey as a sweetener and fish gelatine as a stabilizer. 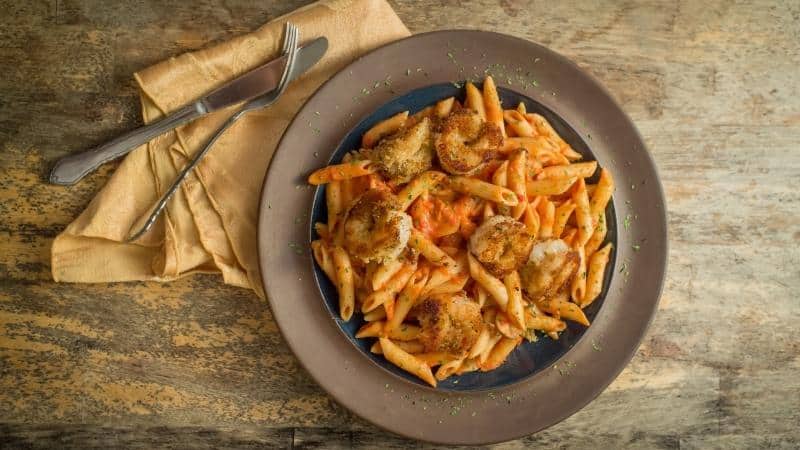 Vodka sauce can be vegan if it contains no dairy. However, most homemade recipes and commercial vodka sauces do have dairy, making them non-vegan-friendly.

If you want to use vegan vodka sauces, stick to brands like Victoria Vodka Sauce and Jar Goods Vegan Vodka-Style Tomato Sauce, which use coconut milk instead of dairy.

What Vodka Is Vegan friendly?

There are plenty of vodka brands that are vegan-friendly. Here are four of the most widely recognized brands:

Vodka O is not vegan because its base ingredient is cow’s whey which is a by-product of the cheese-making process. Vodka O claims that this is the only animal product in their vodka.

Ciroc is made from French grapes, and while they claim that they use no animal products in producing their vodkas and in the vodkas themselves, they are not certified as vegan.

Smirnoff produces a mix of vegan and non-vegan products. Additionally, they claim that the charcoal they use comes from birch wood and not bone char.

However, Smirnoff couldn’t verify whether their founder, Pyotr Smirnov, used animal bone as charcoal in the early years of Smirnoff Vodka.

Moreover, Smirnoff maintains that they don’t use animal products but they also don’t certify their suppliers and a large number of their products.

Absolut Vodka and all its products are considered vegan but they have not been certified.

Moreover, Absolut claims on their website that they do not use animal products in their vodkas and in their production process.

Tito’s Handmade Vodka is not certified vegan but they claim that their products comply with a vegan diet. They also don’t use animal derivatives or test their products on animals.

Interestingly, Tito’s has a program called Vodka for Dog People which aims to rescue and protect animals.

In fact, Tito’s is known for taking in dogs and other animals that wander into their distillery in Austin, Texas.

Pinnacle Whipped Vodka is vegan and while Pinnacle does not disclose the ingredients of their vodkas, they have confirmed that no animal products were used in Pinnacle Whipped.

However, the same can’t be said for Pinnacle Cake Flavored Vodka and Pinnacle Country Fair Cotton Candy Vodka which Pinnacle confirmed are not vegan.

Like Smirnoff, Pinnacle produces a mix of vegan and non-vegan products.

Vodka is traditionally vegan but as more distillers and vodka flavors pop up, more non-vegan vodkas are also hitting the store shelves.

For a vodka to be classified as vegan, it must contain no animal products as either the base ingredient, stabilizer, or sweetener. Additionally, animal bone char must not be used for charcoal filtering vodkas.

While there are a lot of flavored and non-flavored vodkas today that aren’t vegan, there are certified vegan vodka brands that vegans can enjoy.