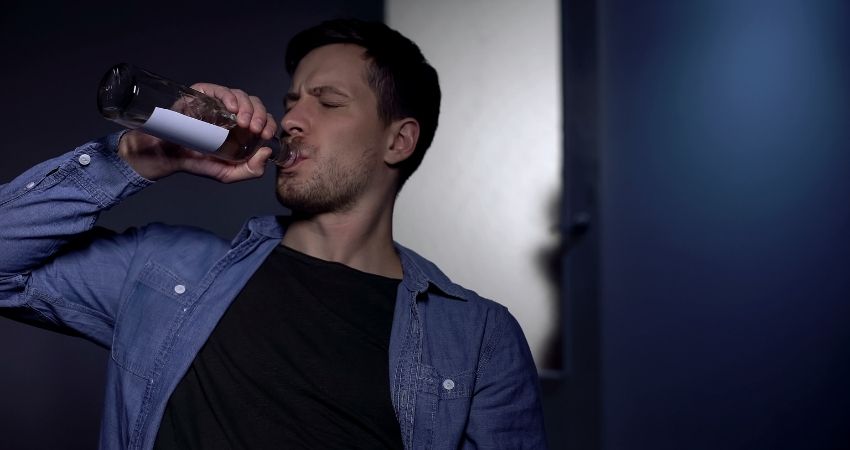 Vodkas are excellent base spirits for cocktails, but if you recently got a hold of a premium brand then you probably heard that good vodka deserves to be taken neat.

If you are not a fan of drinking plain vodka, you must be wondering how to drink vodka straight. I looked into the facts, and here is what I found!

How To Drink Vodka Straight?

Drinking vodka straight is better when the brand you are consuming is middle or top-shelf, as these vodka brands typically have less alcoholic taste and burn. To further reduce any harsh flavor, chill the bottle of vodka in the freezer first. Serving the vodka chilled can make drinking vodka straight more palatable. Additionally, consider taking shots of vodka instead of sipping the vodka.

If you want to learn more about how to drink vodka straight and whether it’s possible to do so without tasting the vodka, keep on reading!

How Do You Drink Vodka Directly?

When drinking vodka directly, meaning you will pour the vodka straight from the bottle without ice or mixers, it is highly recommended that you use high-quality vodka.

Brands like Smirnoff, Ciroc, Absolut, and Skyy are some of the most preferred vodkas for drinking neat because they taste more neutral and cause little to no burn.

If the vodka is warm, stick the vodka in the freezer for 1-2 hours before serving. When vodka is consumed cold, you are less likely to taste any of the vodka’s harsh alcoholic flavor.

Take shots with your chilled vodka or sip the vodka. If you want to get rid of any unpleasant taste on your tongue, prepare chasers like pickle brine, lemon wedges, club soda, or plain old water.

What Happens If You Drink Vodka Straight?

Drinking vodka straight helps you appreciate the distinct flavor of the vodka brand you are consuming.

While vodkas are classified as neutral spirits, each brand of vodka possesses a unique mouthfeel that can only be noticed when taken neat.

Some vodkas will have sweet and citrusy notes, while others will have hints of grain and vanilla, accompanied by dried fruit and spicy aromas, but the taste will depend on the brand.

Additionally, there is a higher chance of getting drunk faster because you will be drinking large amounts of alcohol at once. After all, vodkas typically have a minimum of 40% ABV.

You are likely to feel the signs of intoxication sooner, which is why it is best to eat food and stay hydrated whenever you choose to drink vodka neat.

Is It OK To Drink Vodka Neat?

Drinking vodka neat is not only okay, it is normal and highly recommended. Traditionally, vodka was consumed neat because vodka was often served with food.

Nonetheless, if you have low alcohol tolerance or have no intention of getting intoxicated, it is best to drink in moderation when you are consuming vodka neat.

How Do You Make Vodka Taste Good?

If you are not used to the taste of vodka or the brand you chose is considered bottom-shelf, you can make your vodka taste better by either chilling and/or mixing your vodka.

Chilling your vodka in the freezer can mellow out the harsh taste of even low-tier vodkas. To further reduce the vodka’s alcoholic taste, you may dilute the vodka in ice or mineral water.

For people who want to give their vodka more flavor, adding mixers like fresh fruit juices, simple syrups, lemonades, and ginger beer are the best options.

In case you are intent on drinking your vodka neat, using water and fruit juices as chasers are excellent methods to make vodka taste better.

How Can You Drink Vodka Straight Without Tasting It?

There are many ways you can drink vodka without tasting the vodka, and one of the most popular methods is to plug your nose.

Since 80% of your taste perception occurs through your nose, pinching your nostrils shut before knocking back a shot of vodka can prevent you from tasting the vodka.

Additionally, you can exhale before and after taking a shot, as this would prevent the vodka’s scent from reaching your nose.

Some other methods include using a peppermint mouthwash, drying your mouth, or chasing the vodka with salty or bitter foods quickly after each shot.

How to Drink Vodka Straight Without Throwing Up?

You can drink vodka straight without throwing up if you take measures not to taste the vodka, or if you make sure that you drink vodka with a full stomach.

Healthy meals consisting of foods like salmon, oats, eggs, and yogurt can prevent you from throwing up because the food will keep your stomach from getting upset.

How To Drink Tito’s Vodka Straight?

You can drink Tito’s Handmade Vodka straight the same way you would any other vodka. Put your bottle of Tito’s Vodka in the freezer and serve Tito’s Vodka chilled.

If you’re a fan of Tito’s creamy mouthfeel and peppery spice, you will not have to wait for the vodka to get ice cold.

How Long Does It Take For Vodka To Hit?

How long it takes for the vodka to hit depends on the person drinking. Factors like age, gender, weight, and alcohol tolerance play a huge part in intoxication.

Generally, it takes 3 vodka shots for a woman to feel the signs of intoxication, while it would take a man around 7 shots to feel intoxicated.

To drink vodka straight, choose a middle or top-shelf vodka and put the vodka in the freezer. Once chilled, serve it in shot glasses or in lowball glasses.

Regardless of whether you take shots of vodka or sip vodka, you are less likely to taste the harsh flavors because of vodka’s cold temperature.