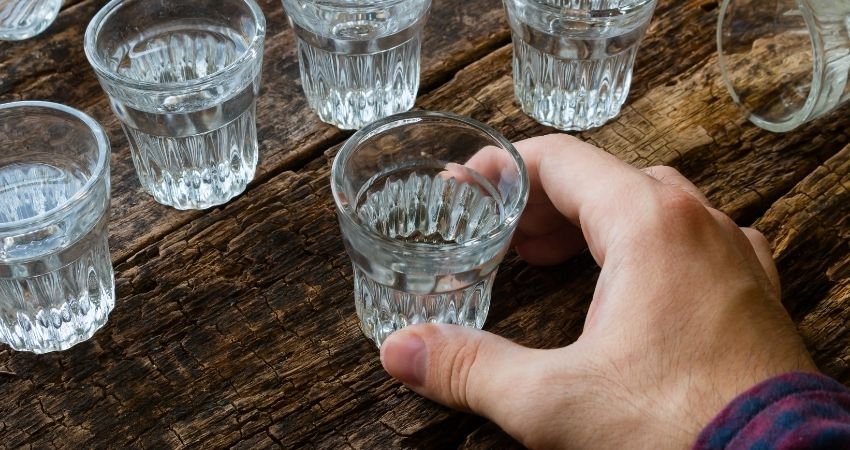 If you are a vodka enthusiast, you probably wondered how your vodka drinking habits compare to the Russians’ since vodka originates in Russia.

In case you want to step up your game, the first question you have to answer is: how do you drink vodka like a Russian? I looked into it, and here is what I discovered!

Russians drink their vodka straight and avoid mixing vodka with sodas and juices. Generally, the Russians believe that vodka is designed to be consumed neat after being chilled in the freezer. Moreover, Russians drink vodka to socialize, which is why there is a lot of food and toasting involved when vodka is present.

If you want to learn more about how Russians drink vodka, what Russians eat when they drink vodka, and what vodka brands Russians prefer, keep reading!

How Is Vodka Traditionally Drunk?

Vodka is traditionally drunk neat, meaning the vodka is not mixed, not even with ice.

To chill a bottle of vodka, the vodka is usually placed in the freezer and brought out only when it is time to drink vodka.

Once served, you have to drink the vodka in one gulp and either eat a salty snack or sniff some dark rye bread after the vodka shot.

Since vodka is a neutral spirit, whatever subtle flavors the vodka has will not compete with the food paired with vodka.

Additionally, Russians often complement their vodka with zakuski, which is a form of Russian mezze or tapas.

Once the traditional zakuski food has been eaten or is not available, Russians sniff rye bread to chase their vodka.

What Is The Proper Way To Drink Vodka?

To drink vodka properly, you have to chill the vodka and serve vodka neat.

Drinking ice-cold vodka without adding anything to the vodka will help you appreciate the vodka’s mouthfeel better.

Additionally, vodka is best served with food and in the company of friends and family.

Is Vodka Part Of Russian Culture?

Vodka is intricately tied to Russian culture because of how vodka is treated as a requirement in every social event of a Russian’s life, namely weddings, births, promotions, and funerals.

Moreover, vodka is a key element not just in social activities, but also in political and military endeavors.

Throughout history, several accounts have surfaced of how Russians use their vodka drinking culture to remove the inhibitions of their political allies and adversaries.

Russian leaders like Peter the Great, Boris Yetlzin, and Joseph Stalin are known to have used vodka to glean useful information from politicians.

What Do Russians Eat While Drinking Vodka? 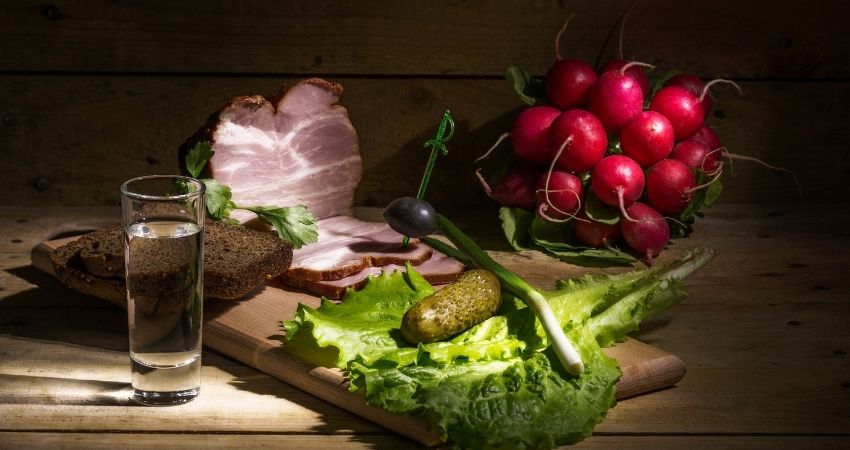 Vegetables are some of the most popular snacks served with vodka. Steeped and salted tomatoes and cucumbers are local favorites, along with Antonovsky apples.

If you want to try something truly Russian, borscht or Russian cabbage soup is an excellent choice, paired with a suckling pig and an assortment of meat.

Why Do Russians Eat Pickles After Vodka?

Russians eat pickles after each vodka shot because the combined saltiness and spiciness of pickled food soften the harsh alcoholic taste of most vodka.

Some popular pickled foods that Russians like to eat while drinking vodka are cucumbers, pumpkins, mushrooms, and tomatoes.

Why Do You Sniff Bread After Vodka?

Russians sniff rye bread after knocking back their vodka because the bread soaks up the alcohol, and the scent of rye can offset the alcoholic taste on your tongue.

Contrary to popular belief, sniffing rye bread isn’t done in every setting and occasion where vodka is consumed.

Usually, Russians sniff rye bread once they run out of zakuski. If they’re feeling full, or if they’re drinking with casual company, but most Russians will never smell rye bread with posh guests and on formal occasions.

Why Do Russians Drink Vodka?

Since vodka dates back to the middle ages and was first used medicinally in Russia, Russians believe that vodka is healthier than most spirits.

Furthermore, Russians believe that the worse their hangover, the more harmful an alcoholic drink is. While this isn’t technically true, this is a deeply set belief in a lot of Russians.

With vodka being distilled numerous times, vodka has little to no properties that can cause hangovers, hence why Russians are convinced that vodka is good for them.

Additionally, vodka is available in Russia in a broad range of price brackets. Thanks to vodka’s accessibility, vodka easily became the preferred spirit of many Russians.

Do Russians Eat Onions With Vodka?

Russians eat a wide variety of food when drinking vodka, and while onion may be a part of it, onions aren’t exactly local favorites.

Moreover, there is nothing to suggest that eating or sniffing raw or cooked onion after each vodka shot is a Russian tradition.

More likely, the Russians who use onion as a chaser for vodka do it out of preference more than tradition.

How Strong Is Vodka In Russia?

Russian vodka has the same minimum alcohol by volume as other vodkas, which is 40% or 80 proof. That said, there are Russian vodkas that have a higher ABV.

Additionally, the strength of Russian vodka depends on the person drinking. Generally, Russian vodka is just the same as other vodkas produced in other countries.

What Vodka Do Russian People Drink?

Russia is a massive country, and some regions have locally-made vodkas that are not available elsewhere, so it is fair to say that Russians drink a wide assortment of vodka.

Nonetheless, in terms of branded vodka, there are a couple of names that stand out, and some popular Russian vodka brands are Russian Standard, Stolichnaya, Beluga, and Tsarskaya.

Have a look at our other articles to learn how to drink vodka straight, what Russian vodka is made from, and why vodka is popular in Russia.

To drink vodka like a Russian, you have to serve vodka chilled and neat and serve the vodka with zakuski, which are Russian tapas or meze that will complement the vodka.

To chase any vodka taste you dislike, take a bite of pickled food after each shot, as the saltiness and spiciness of the food will overwhelm your taste buds.