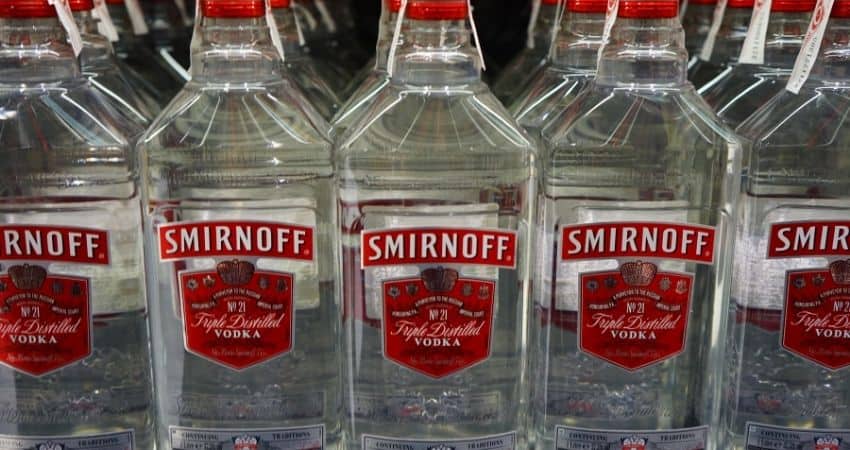 Smirnoff is one of the strongest players in the spirits market today, and since Smirnoff’s conception in 1864, Smirnoff has proven time and again why Smirnoff is among the best vodkas in the world.

Given Smirnoff’s popularity and early start in the vodka industry, you might be wondering if Smirnoff is Russian. I looked into it, and here is what I discovered!

Smirnoff is originally a Russian vodka. Founded in 1864 by Pyotir Smirnov, Smirnoff grew in popularity in Russia until the Bolshevik revolution forced Smirnov’s descendants to migrate to Europe. Eventually, Smirnoff was sold to British beverage company Diageo and based in America. In fact, Smirnoff has been made in the US as far back as the 1930s.

In case you are curious to learn more about Smirnoff Vodka’s origins and how Smirnoff progressed from being a Russian brand to being an American brand, keep reading!

What Country Is Smirnoff Vodka From?

In the 1930s, Smirnoff was acquired by two companies that eventually merged to become Diageo, the leading beverage producer in the world today.

However, Smirnoff had already been relocated to America for a long time by then and sold to numerous beverage companies hoping to have a breakthrough with American consumers.

Smirnoff Vodka is proudly claiming that it is an American brand since Smirnoff Vodka has been distilled in America for several decades.

However, P.A. Smirnov’s descendants launched their own vodka in Russia called “Smirnov” and claimed that it is “The Only Real Smirnov.”

Consequently, a series of lawsuits ensued, and Smirnoff Vodka was able to reclaim its trademark.

Nonetheless, Diageo decided to enter into a joint venture with the Smirnov company in 2006, and Smirnov is now recognized as the sister product of Smirnoff Vodka.

This means that while Smirnoff Vodka is an American product, there is a Smirnov brand that remains a Russian brand, but these two must not be confused with each other.

Smirnoff is the French spelling of the Russian surname Smirnov.

Vladimir Smirnov, the descendant of P.A. Smirnov, decided to use the French spelling of their surname after fleeing Russia because of the Bolshevik revolution.

Additionally, French was a common language in Russia during those years among the upper classes, although French was already beginning to fade in popularity by that time.

This fact could have influenced Vladimir Smirnov’s decision when he decided he had to rename his vodka brand.

Is Smirnoff Made In India?

Contrary to popular belief, Smirnoff is not produced in India. However, Diageo does have a branch in India called United Spirits Unlimited and it is responsible for bottling Smirnoff.

Furthermore, Diageo has made it clear that Diageo will not manufacture Smirnoff or any of its liquors in India.

What Countries Is Smirnoff Sold In?

Smirnoff is reportedly sold in 160 countries, including the key countries where Smirnoff is produced outside of the United States.

Additionally, the production of Smirnoff in these countries is not limited to vodka, but also other Smirnoff products like Smirnoff Ice, Smirnoff Sourced, and others.

Moreover, all distilleries outside of the US that produce Smirnoff use the original 1864 recipe that P.A. Smirnov created when Smirnoff was founded in Moscow, Russia.

However, Smirnoff confirmed that the grain used to create Smirnoff Vodka varies depending on the country.

Where Is Smirnoff Made?

Smirnoff is made primarily in the US, but to maintain Smirnoff’s affordability and accessibility worldwide, Smirnoff is also produced in 15 different countries.

Where Is Smirnoff Made In The UK?

In the UK, Smirnoff is produced mainly in Scotland. Some of Diageo’s Scottish distilleries are the Royal Lochnagar, Talisker, Blair Athol, Level, and Cameronbridge.

Additionally, these distilleries also produce not just Smirnoff Vodka, but also other spirits under Diageo like Gordon’s gin and Johnnie Walker whiskey.

Smirnoff was founded by Russian serf Piotr Areneevich Smirnov. With his hard work and clever marketing, he rose in ranks and made Smirnoff popular in Russia.

In fact, Smirnoff was even recognized by Russia’s Imperial Court, and P.A. Smirnov received a special designation from the Tsar making him the Purveyor of the Imperial Court.

In simpler terms, Smirnov was assigned as the official vodka supplier of the Tsar, the royalty, and the aristocracy.

Smirnoff Vodka is currently owned by Diageo, the leading beverage producer in the world and owner of other popular spirits such as Ciroc, Ketel One, and Johnnie Walker.

However, before Diageo bought Smirnoff Vodka, Smirnoff was first owned by the Smirnov family, and then the Russian state for a brief time during the Bolshevik Revolution.

Eventually, Grand Metropolitan merged with Guinness in 1997 and they became Diageo plc.

Why Did Smirnoff Leave Russia?

Vladimir Smirnov had no choice but to sell Smirnov Vodka to the Russian State when the Tsar nationalized the Russian vodka industry in 1904.

Is Smirnoff Made From Potatoes?

Smirnoff is a grain vodka and it is made specifically from corn. However, Smirnoff has produced in around 16 countries, and not all of them use corn.

While Smirnoff does not disclose the type of grain used by their distilleries in different countries, Smirnoff has confirmed that they use grain.

Smirnoff Vodka is an American brand that was founded in Russia over a century ago. Since the Smirnov family fled Russia, Smirnoff has been sold to multiple companies.

Eventually, Smirnoff was acquired by Grand Metropolitan, which merged with another company to form Diageo.

Since Smirnoff has been produced in America for decades, Smirnoff is widely recognized now as an American brand with Russian origins.