There are plenty of ways to enjoy vodka and one of them is through gummy bears. Soaking these delicious fruit gum candy makes for a fun and colorful treat.

If you want to make vodka gummy bears for your upcoming party, you need to know how long you have to soak gummy bears in vodka. I did the research and here’s what I found!

How Long Do You Soak Gummy Bears In Vodka?

You can soak your gummy bears in vodka for anywhere between 8 hours to 4 days. Take note, however, that different durations yield vastly different results. Depending on the duration, gummy bears, and vodka you choose, the bears could be less chewy, boozier, or significantly bigger than their original size.

If you want to learn more about soaking gummy bears in vodka, how much vodka to use, and why some gummy bears turn slimy, keep on reading!

Vodka-soaked gummy bears do work in the sense that the bears do succeed in absorbing the vodka.

Depending on the brand of the gummy bears you use and how long you soak them, the bears can turn out too alcoholic, chewy, slimy, or sweet.

To understand how this happens, you have to know that gummy candy consists of table sugar, corn syrup, and a combination of pectin and gelatin.

By weight, gels are mostly liquid although they retain a solid appearance. Gelatin traps other liquids like alcohol and restricts its movement to come off as solid.

When you bathe gummy bears in vodka, osmosis occurs and the ethanol flows into the bear where the gelatin traps it and causes the entire gummy bear to swell.

For your vodka gummy bears to work, though, it’s best to limit the proof to 80. Any higher than 40% alcohol content can weaken the gelatin since ethanol is a powerful solvent.

How Much Vodka Do You Put In Gummy Bears?

There’s no specific measurement required when soaking gummy bears in vodka as the amount you use depends largely on the number of gummy bears and the container. But ideally, the vodka should just be enough to cover the bears.

A standard packet of gummy bears would need an estimate of 150-200 ml of vodka to provide sufficient coverage.

Afterwards, you may leave them covered or uncovered on your kitchen counter until the bears soak up all the vodka, or you’re satisfied with the taste and appearance of the bears.

Remember to check on the bears occasionally and to stir them because they tend to stick together as they absorb more vodka.

How Long Does It Take For Gummies To Absorb Vodka?

If you want the gummy bears to absorb all the vodka you used to soak them with, then you might have to wait anywhere between 8 hours to 4 days. Some even go as long as 5 days.

Different brands of gummy bears can absorb vodka at different rates. When the brand you choose has wax on the bears, you can expect the absorption to be much slower than usual.

For the bears to absorb all the vodka, it would normally take more than 24 hours. During that time, the bears would swell and at around 4 days, the infusion would be more thorough.

How Do You Keep Gummy Bears From Melting In Vodka?

Gummy Bears may melt if the alcohol content of the vodka you use is above 40% or 80 proof.

Due to ethanol being a powerful solvent, the gelatin may not be able to stick together enough to retain its solid form. To avoid this, use vodka that has 40% alcohol by volume or lower.

Furthermore, keeping the vodka-soaked gummy bears in a cool place helps the gelatin retain its shape. Warm temperatures would also melt the bears even if the vodka you use is 80 proof or lower. 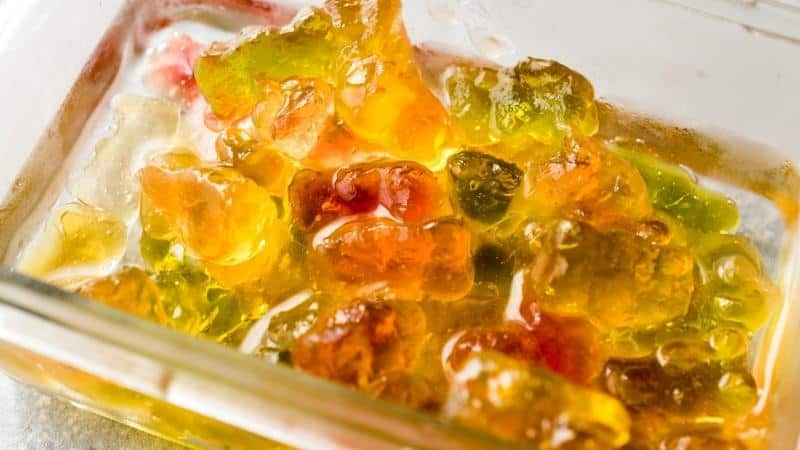 Vodka gummy bears taste best when consumed right after they’ve soaked up all the vodka and they can remain in pleasant shape for two days afterward.

While they wouldn’t normally go bad for one whole week if you store them in the fridge, it’s best to consume them within three days after the soak.

Why Are My Vodka Gummy Bears Slimy?

Gummy bears turn slimy when they absorb the vodka and this is perfectly normal.

That said, gummy bears can also turn slimy when submerged in the vodka for too long, either because you keep on adding vodka or they can’t absorb all the vodka you initially put in.

Since the brand of gummy bear you use affects the absorption time and the efficiency of the absorption, it might take a lot of trial-and-error to differentiate between good and bad slime.

How Many Vodka Gummy Bears Equal A Shot?

Your choice of vodka, gummy bear, and recipe determines how many bears it would take to equal one standard drink of vodka which is 1.5 ounces.

To get a rough estimate, weigh the bears before you soak them. Gummy bears usually weigh 2 grams each fresh out of the package. Once soaked, their weight can change from 4 to 6 grams.

Assuming the bear weighed 4 grams after soaking, it could contain 0.071 ounces of vodka. This means it would take around 21 bears to equal one standard shot.

If you want to learn more about vodka, you can see our related posts on how long vodka gummy bears last, whether you can make vanilla vodka with vanilla extract, and whether you can mix rum and vodka.

Nonetheless, some people soak gummy bears for as long as 4 days to make sure that they are thoroughly infused with vodka.

Additionally, absorption time depends largely on the type of gummy bear and vodka you use. Vodka with a proof higher than 80 could melt the gummy bears since the gelatin won’t be able to contain the ethanol.

Likewise, if the gummy bears have wax, the soaking time would be considerably longer because the bears would have a much harder time absorbing the vodka.