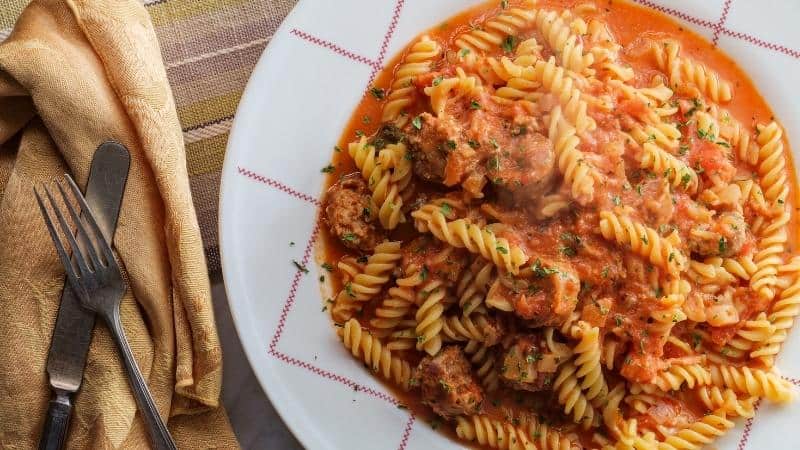 Vodka isn’t just good for drinking straight but also for revitalizing the flavors of traditional sauces as vodka sauce and reimagining your favorite Italian dishes.

Perhaps you’re wondering whether a bowl of pasta would give you the same buzz from a few shots of plain vodka. But does vodka sauce still have alcohol? Here’s what I discovered!

Does Vodka Sauce Have Alcohol?

Vodka sauces can retain their alcohol content depending on the proof and quantity of the vodka you use, as well as the manner in which you cook it. For vodka’s alcohol content to completely evaporate, you must cook the sauce for three hours or more. As for jarred vodka sauces, the nutritional label will tell you whether it contains alcohol.

Vodka sauce is a very interesting ingredient. If you’re still curious about it and have more questions, keep reading!

Does Alcohol Cook Off In Vodka Sauce?

Alcohol from any vodka sauce can burn off but that doesn’t mean there won’t be any alcohol left once your sauce is done and ready to eat.

In fact, dishes made with distilled alcohol like vodka can retain as much as 85% alcohol depending on your cooking method.

Factors like ratio, temperature, and duration are crucial in determining how much alcohol your vodka sauce retains after cooking.

Additionally, most cookbooks and online recipes neglect to mention that vodka sauce takes up to three hours of cooking time for all the alcohol to evaporate from a dish.

However, traditional vodka sauces only use meager portions of vodka, making it possible to evaporate a huge amount of it while cooking.

If you use ¼ cup of vodka in your sauce, you can let it simmer for 20 minutes and about 40% of the vodka’s alcohol content will evaporate.

Remember that pasta sauce is best cooked at around 74°C, and alcohol starts evaporating at around 78°C.

Increasing the temperature four degrees higher than the normal temperature you cook pasta sauce in would ensure that the alcohol burns off.

Furthermore, since the duration is a crucial factor in taking out the vodka’s alcohol content, make sure not to add the vodka too late as that would result in less time and less alcohol evaporating.

By the time you’re done cooking, the sauce should have an alcohol content that’s less than a standard drink and barely taste like vodka.

Can You Get Drunk Eating Vodka Sauce?

Vodka sauces normally have low amounts of alcohol. Add to that the fact that most of the alcohol gets burned off, it’s unlikely that they can intoxicate you.

If a person who consumes hard liquor regularly eats pasta sauce that has a high alcohol by volume (ABV), it’s unlikely that this person would become intoxicated.

In most cases, vodka sauces have such low alcohol content that the ABV is considered negligible even by pediatricians.

That said, getting drunk off of vodka sauce depends entirely on your recipe and how you execute it.

When you flambé the vodka sauce and cook it right after, around 75% of the alcohol content evaporates, leaving your sauce with an extremely low ABV if any remains at all.

Due to the different ways people make vodka sauces, it’s difficult to tell exactly how much alcohol gets burned off and whether a particular sauce would get you drunk.

Nonetheless, it’s good to remember that every 15 minutes of simmering would result in a maximum of 5% alcohol being evaporated.

Does Vodka Sauce Have Vodka? 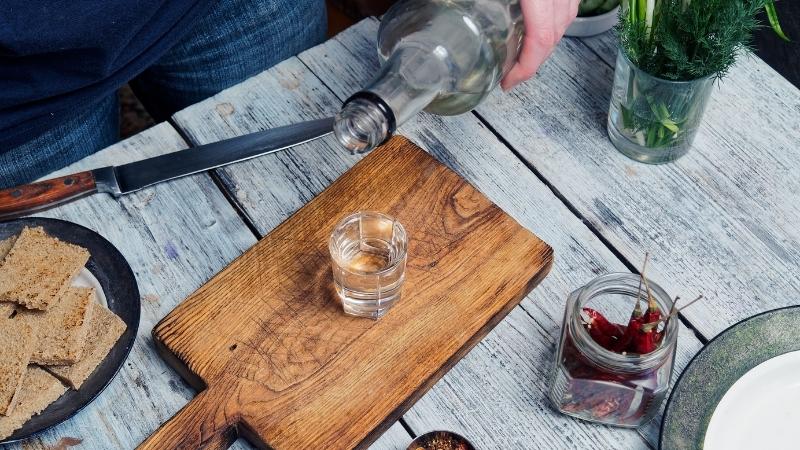 Vodka is an integral ingredient in vodka sauce and while it can be replaced with alcoholic and non-alcoholic beverages, they can’t perfectly recreate vodka’s impact on sauces.

This is because vodka reinforces the cohesive texture of the tomato sauce and enhances existing flavors instead of overpowering them with its own, as is the case with beer or wine.

Moreover, since vodka consists of only water and pure ethanol, it’s better at bringing out flavors in tomato sauces that can only be dissolved in alcohol compared to other liquors.

Nevertheless, it’s still possible to make vodka sauce without vodka if you trade in a spirit with the same proof and subtle flavor profile.

Chef Suzannah Gerber claims that if you keep the total sauce by volume under 2%, any distilled spirit with a proof of 80 or higher can improve the aromatics of your sauce.

Moreover, any higher than 2% would make the vodka or other distilled spirits you add distinguishable and possibly overwhelming.

This means that in order to make a delectable vodka sauce, it’s the distilled spirits’ ABV and flavor profile that counts the most.

Does Bertolli Vodka Sauce Have Alcohol?

Nonetheless, some consumers speculate that it has around 3% alcohol content.

Does Classico Vodka Sauce Have Alcohol In It?

Classico Vodka Sauce’s nutritional fact label lists vodka as an ingredient and the order in which it was listed suggests that a fair amount of it was used.

Since Classico did not include any alcohol content in the label, it’s difficult to tell how much alcohol their vodka sauce contains.

If you want to learn more about vodka, you can see our related posts on whether vodka is halal, if vodka is vegan, and if vodka is sweet.

Vodka sauces can have as much or as little alcohol content depending on the recipe you use and the way you cook it.

In general, it takes three hours or more to burn off all the alcohol in the vodka you add to your sauce. Most cookbooks and online recipes, however, neglect to mention this.

Traditional vodka sauces require only small portions of vodka which is why their alcohol content is negligible even if you don’t cook the sauce for several hours.

As a result, there’s little chance that a vodka sauce can cause intoxication.