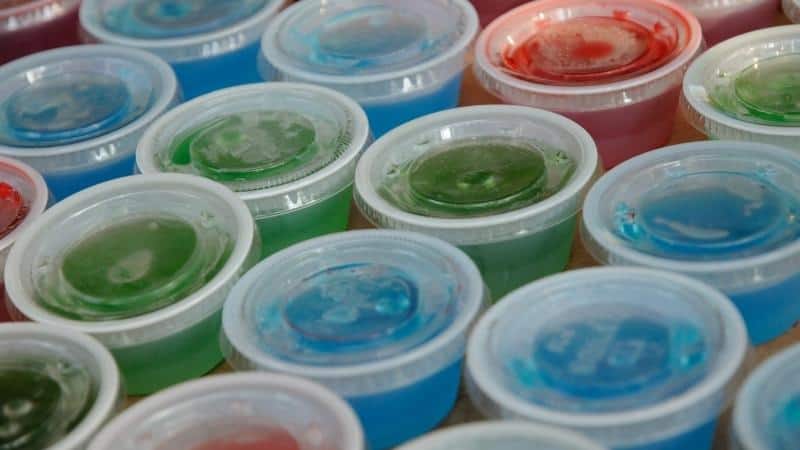 Jello shots are excellent additions to any event, be it a casual get-together or a festive holiday party. They’re colorful, playful, and a discreet way to knock back some vodka.

If you’re interested in making your own jello shots, you might be wondering what vodka to use to achieve the most palatable results. I did the research and here’s what I found!

What Vodka To Use For Jello Shots?

Using a top-shelf vodka brand for your jello shots is the best option as the alcohol will taste smoother and won’t overpower the jelly’s flavor. Two of the most recommended brands are Absolut and Smirnoff but other top-shelf brands like Tito’s, Grey Goose, and Hangar 1 will also do. Ultimately, however, the best vodka to use depends on your preferences.

If you want to learn more about what vodka brands are best for jello shots, how much vodka to use, and whether jello shots can get you drunk, keep on reading!

What Vodka Is Best For Jello Shots?

Here are the most recommended vodka brands for making jello shots:

Can You Substitute Vodka For Water In Jello Shots?

You may replace the usual half cup of water in a jello shot recipe with vodka and your jello shots will be considerably stronger because the recipe now has a full cup of vodka.

It’s important to note that the half cup of water you’re replacing with vodka is the cold water, not the hot one as cooking jello with pure vodka will cause most of its alcohol content to evaporate.

On the other hand, if you choose to reduce the heat and the cooking time, the high concentration of alcohol that could be left behind might hinder your jello from setting.

Additionally, you should take care not to add the vodka while the water is still boiling. Let it cool down or else you’ll risk making your jello shot less potent than you intended.

How Much Vodka Can I Put In Jello Shots?

There’s no definite measure of vodka to use in every jello shot recipe. You may mix as little or as much vodka as you like, depending on what suits your preference.

If it’s your first time making jello shots, however, it’s good to know that standard recipes use a half cup of vodka for every one cup of juice, half cup of water, and one packet of gelatin.

Assuming you use vodka with 80 proof or 40% alcohol by volume (ABV), you should end up with jello shots that have 10% ABV per shot.

Your jello shots’ ABV will vary depending on the recipe you follow and the vodka’s proof, which is why it’s important to know how strong the vodka is before mixing it in any quantity.

Moreover, you should be careful in adjusting the ratio of gelatin, water, and other ingredients you add in relation to vodka because you might make the jello shots too strong or too weak.

Can You Put Too Much Vodka In Jello Shots? 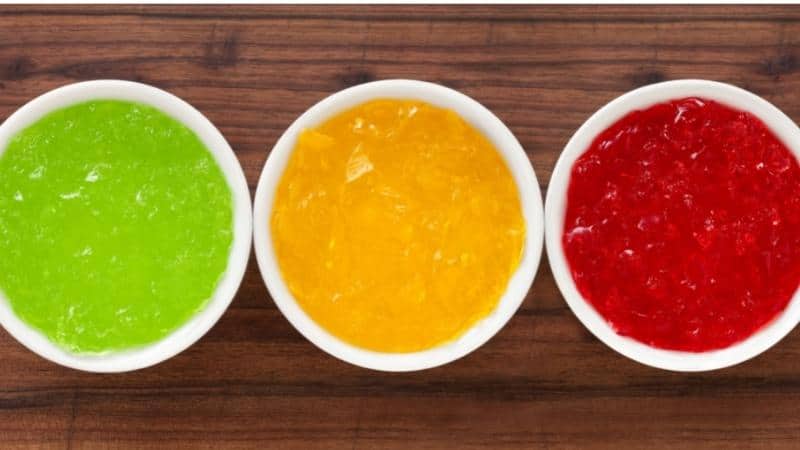 It’s possible to put too much vodka in your jello shots. You’ll know if this is the case because they won’t set and they’ll either retain their liquid state or become slimy.

This happens because the ethanol in vodka has components that make it difficult for the gelatin to retain its solid form.

If you want to avoid putting too much vodka in your jello shots, make sure that you use the right proportions and increase the other ingredients as you add more vodka.

How Much Vodka For Strong Jello Shots?

Since putting too much vodka in your jello shots can prevent them from setting, it’s important to use the correct recipe for stronger jello shots.

At most, you can use around 20 ounces of vodka for every 4 ounces of boiling water. Make sure to add the vodka after the water has cooled down to keep the alcohol from evaporating.

Furthermore, it’s crucial that the gelatin mix dissolves completely in the boiling water so that it will go well together with the larger amount of vodka you’re going to mix it with. Take note that the more vodka your jello shots have, the longer it will take for them to set.

With jello shots that contain more than 15 ounces of vodka, keep them in the fridge for as long as 24 hours to make sure they set nicely.

Additionally, expect jello shots with more vodka to have a higher ABV and to taste like pure vodka.

To achieve the ideal balance of flavor and guarantee that the gelatin will be set, it’s recommended that you use only up to 14 ounces of vodka.

Can You Get Drunk On Jello Shots?

Whether jello shots can intoxicate you depends on several factors, including the amount of vodka your jello shots have, your gender, weight, food intake, and alcohol tolerance.

If you were to make 12 jello shots with a half cup of vodka, each shot would contain ⅓ ounce of vodka. From this, you can assume that 4 jello shots would equal a regular shot.

Provided that you have a low alcohol tolerance and you don’t consume anything else, it’s possible to feel the effects of intoxication.

Nonetheless, it would take plenty of jello shots with a higher ABV to get you completely drunk.

If you want to learn more about vodka, you can see our related posts on how much vodka to use for jello shots, how long you have to soak gummy bears in vodka, and how long vodka gummy bears last.

It’s better to stick with top-shelf vodkas when creating jello shots as they are more likely to complement the flavor of the gelatin without being too alcoholic.

Nonetheless, whether a certain vodka brand works depends on the jello shot recipe you use and your preferences in taste.