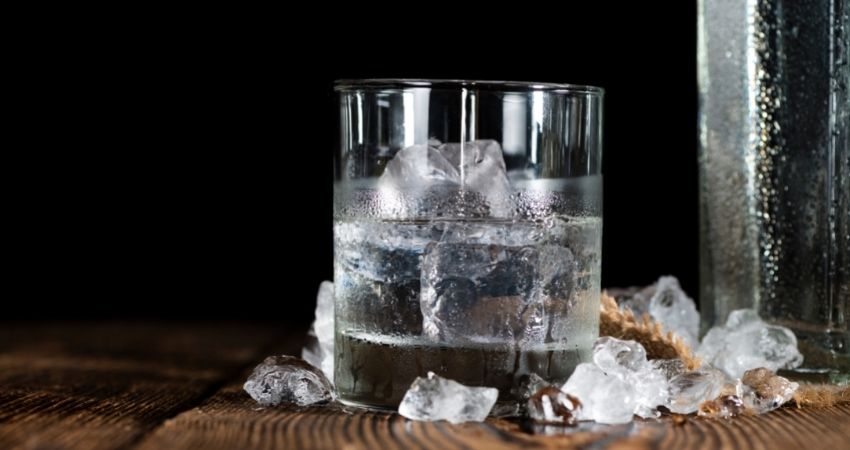 Many people believe that most vodkas are made from potatoes when in fact, only 3% of vodkas today are potato-based, with the remaining 97% using grains and other food.

If you are on the lookout for a vodka made from potatoes, you can check out this complete list of potato vodkas in the market today!

Vesica Vodka is an award-winning vodka that is widely known for its exceptional taste. When taken neat, you will detect fruity notes with traces of chocolate and berries.

Additionally, Vesica vodka has a mildly oily texture and a lingering warmth on the palate, but Vesica vodka doesn’t leave a harsh burn.

A product of Poland, Vesica vodka is triple distilled and triple filtered through charcoal, which is considered the best way to filter vodkas.

To further improve its purity, Verica vodka undergoes a ceramic candling process after the ethanol is diluted with water.

As for the name, Vesica is derived from the shape called “vesica piscis.” Moreover, the vesica piscis is the brand’s logo and is incorporated in Vesica’s bottle design.

Additionally, it takes 6 months to produce Chopin vodka from farm to bottle.

When you open a bottle of Chopin, you will be greeted with a pleasant aroma reminiscent of apple pies. For some, this scent registers as dark and earthy.

As for flavor, Chopin has a soft and creamy texture with earthy undertones. Moreover, Chopin vodka tastes crisp and yields no burn once swallowed.

Thanks to Chopin vodka’s savory mouthfeel, Chopin vodka does well as a standalone drink and as a base ingredient for apple-flavored cocktails.

Cape Cod Vodka is an American brand produced from a mixture of corn and potatoes. By mixing these two base ingredients, Cape Cod created an incredibly palatable vodka.

On the nose, Cape Cod Vodka is gentle with vanilla notes, and the way Cape Cod Vodka tastes extends to Cape Cod’s flavor, which has a light sweetness and traces of white pepper.

Zodiac Vodka is made in Texas using russet potatoes from Southeastern Idaho, water from the Snake River aquifer, and a single-source distillation process.

Since Zodiac Vodka creates everything they use, consumers can trust that every aspect of a Zodiac Vodka is of the highest quality.

Taste-wise, Zodiac vodka is a bit oily and thick with a mild warmth. However, Zodiac vodka doesn’t burn like other vodkas do, and is considered a smooth drink despite the heat.

Additionally, there’s a Zodiac Black Cherry Vodka which is made with the classic Zodiac Vodka and authentic black cherries.

Compared to the original Zodiac Vodka, the Zodiac Black Cherry is sweeter and smoother.

Boyd & Blair Potato Vodka is an award-winning vodka made in a small distillery in Glenshaw, Pennsylvania.

Additionally, Boyd & Blair is a family-run handcrafted vodka that uses only locally sourced ingredients and a Palate Distillation method, meaning the process is not automated.

To determine when a Boyd & Blair Vodka is up to standard, each batch is tested and judged based on the taste instead of a certain number of distillations.

Generally, Boyd & Blair vodka is supposed to have a fresh aroma reminiscent of cotton and minerals.

As for mouthfeel, Boyd & Blair has a rounded texture with sweet, earthy undertones. Keen drinkers will also be able to detect traces of lime zest in Boyd & Blair vodka.

Born and Bred Potato Vodka is a brand brought to life by Hollywood actor Channing Tatum and his former assistant, Jack Maloney.

Produced in the Grand Teton Distillery in Driggs, Idaho, Born and Bred vodka is made from locally sourced potatoes and unspoiled glacial water from the Grand Teton mountains.

When you drink Born and Bred Vodka, you will be treated to an aroma and flavor that has hints of banana and lychee with just enough spice for a powerful finish.

Moreover, Karlsson’s Gold Vodka blends 7 different varieties of new spring potatoes and distills their potato mash only once, albeit using a thorough method.

By refraining from over-distilling their vodka, Karlsson’s can preserve the taste of the potatoes and the terroir the potatoes grew in, which is why Karlsson’s vodka is unfiltered.

As such, Karlsson’s Gold Vodka has an oily texture with an alkali tang. While Karlsson’s does have a slight burn, Karlsson’s vodka doesn’t detract from the vodka’s dry vanilla and peppery finish. 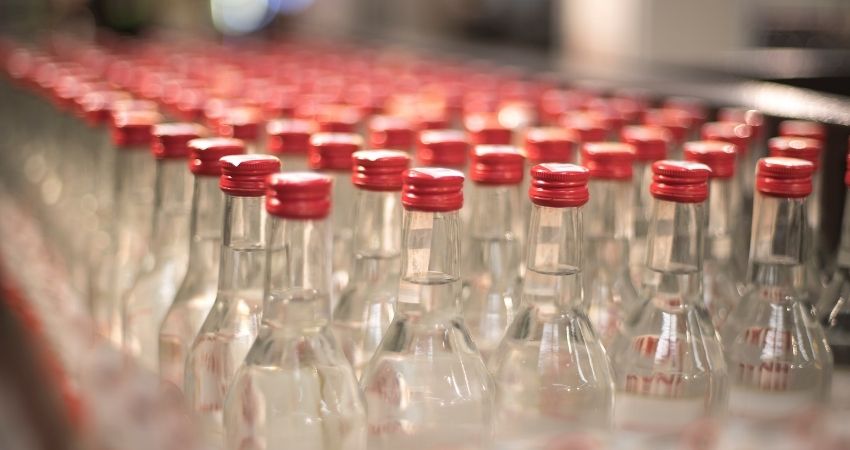 Chase Vodka is a British brand that uses 250 locally sourced potatoes per bottle. Additionally, Chase Vodka is made in batches in a copper pot still named Fat Betty.

As a result, Chase Vodka has a silky texture with green apple, butter, and vanilla accents and hints of potato essence. Moreover, Chase Vodka yields a clean and crisp finish.

Due to its exquisite quality, Chase Vodka was awarded Gold at the San Francisco World Spirits Competition.

Vikingfjord Vodka is a Norwegian brand made with potatoes and Norwegian glacial water initially launched in 1986 but didn’t become successful until a relaunch in 1990.

Since then, Vikingfjord Vodka has won several international wine and spirits competitions and has become a bestselling spirit in Norway.

A freshly opened bottle of Vikingfjord Vodka has a subtle and neutral smell. On the tongue, Vikingfjord also has a neutral flavor profile with earthy and sweet undertones.

Once swallowed, you’ll notice a lingering bitterness, but nothing distasteful.

Furthermore, Vikingfjord vodka is an affordable brand that typically costs less than other potato vodkas.

Blue Ice Vodka is an American brand made from russet potatoes in Idaho and water from the Snake River Aquifer of the Grand Teton Mountains.

To produce Blue Ice vodka, Master Distiller Bill Scott and his team use a four-column still that is meticulously monitored.

Afterward, the ethanol is filtered five times through charcoal, a filter press, travertine, garnet crystal sand, and submicron before being diluted and bottled to proof.

As a result, Blue Ice Vodka yields a mineral taste that fades into a peppery spice. Afterward, the oily texture takes over and finishes with earthy tones.

To create a pure and smooth spirit, Grand Teton Potato Vodka is distilled 20 times and filtered through charcoal and garnet crystal sand.

To make sure that the interesting tastes of their vodka are highlighted, 44 North Huckleberry decided to settle for 35% ABV or 70 proof instead of the usual 40% ABV or 80 proof.

With a lower alcohol content than other vodkas, even drinkers new to vodka will have an easy time detecting 44 North Huckleberry’s mildly sweet flavor.

Luksusowa Vodka is a Polish brand that means “luxury.” True to its name, Luksusowa vodka is considered a premium vodka with an exemplary mouthfeel.

Made from a combination of Polish rye, potatoes, and pure artesian well water, Luksusowa vodka is refined via triple distilled and charcoal filtration.

This combination of ingredients and processes results in a vodka that has a sweet and slightly alkaline aroma, which is bolder compared to grain vodkas.

As for taste, Luksusowa Vodka has a medium body and earthy undertones that turn bitter and crisp. Additionally, the bitter taste tends to linger.

On account of the bitterness and slightly alcoholic finish, Luksusowa Vodka is best mixed instead of taken neat.

Despite Luksusowa’s impressive mouthfeel and reputation, Luksusowa vodka is considered one of the most affordable brands in the market.

Monopolowa is an Austrian vodka brand that means “monopoly,” and Monopolowa follows an old family vodka recipe and is made with special varieties of potatoes.

Once the potatoes are rectified, the resulting vodka is diluted, filtered, and bottled at 80 proof. Thanks to the superb quality, Monopolowa vodka has won several international awards.

Nonetheless, Monopolowa vodka isn’t regarded as the smoothest vodka in the market.

Monopolowa has a robust body that makes Monpolowa vodka an excellent base spirit for cocktails.

If you want to take Monopolowa vodka neat, expect Monopolowa to have strong citric notes with traces of vanilla and buttercream then a creamy finish.

To purify their potato mash, Woody Creek uses their custom Carl stills, which are copper stills from Goepingen Germany.

Nonetheless, Woody Creek vodka is a predominantly neutral vodka with just enough nuances in terms of notes to offer an interesting mouthfeel.

On the nose, Woody Creek comes off as clean and mildly sweet. Once you drink Woody Creek vodka, you’ll taste mild traces of buttercream and vanilla accentuated by a silky texture.

Soon after, you’ll be treated to a peppery taste that gives Woody Creek vodka a slightly viscous and dry finish.

Claremont Vodka is an American brand that hails from New Jersey. Furthermore, Claremont proudly produces their vodka from farm to bottle in their Fairfield distillery.

Experienced vodka drinkers will easily detect the earthy cocoa tones of Claremont Vodka. However, Claremont is generally very neutral in both flavor and aroma.

As such, Claremont Vodka makes a good sipper and mixer. You’ll find that it does the job well when you want to take it on the rocks or use Claremont Vodka to make your favorite cocktail.

Interestingly, Claremont Vodka is the only spirit from New Jersey to receive two gold medals at the San Francisco World Spirits Competition.

As further proof of its remarkable quality, Claremont Vodka received a 93-point rating from Wine Enthusiast Magazine in 2016.

Have a look at our other articles to learn why Grey Goose Vodka is expensive, what wheat vodka is, and what watermelon vodka is.

While there may be more grain vodkas in the market, potato vodkas are not quite ready to bow out of the spirits scene yet.