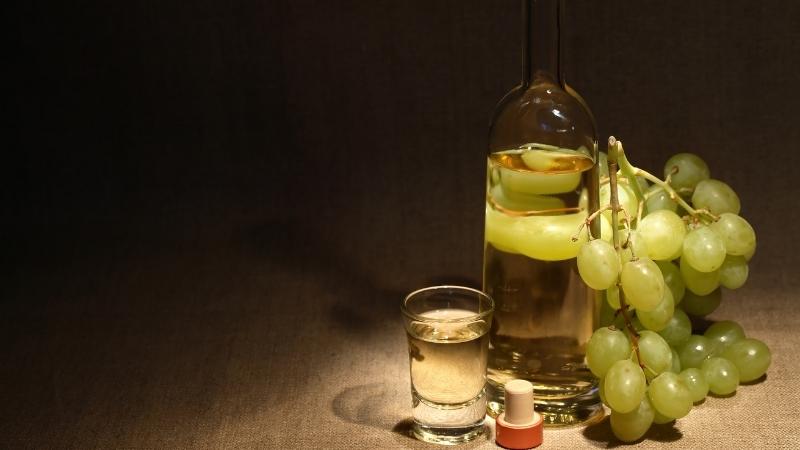 Vodka can be made from any food that contains sugars and starch. Among the most common base ingredients for vodka in use today are rye, corn, potatoes, and even grapes.

When vodka is made from grapes, it might make you wonder whether vodka can be considered wine as well. I did the research and here’s what I discovered!

Vodka and wine are two vastly different beverages, even if they are made from the same grapes. In fact, vodka is classified as a spirit, while wine is non-spirit alcohol. Additionally, vodka has a neutral flavor profile, while wines may range from bitter to extremely sweet. Moreover, it’s possible to turn wine into vodka, but not the other way around.

If you want to know more about the similarities and differences between vodka and wine and which of the two is stronger, keep on reading!

Is Vodka Liquor Or Wine?

Vodka is a liquor, not a wine.

The term “liquor” is used for alcoholic drinks with an alcohol by volume (ABV) of 30 or higher. Any drink with an ABV lower than that is simply referred to as alcohol.

Since wine has a limit of 25% ABV, it cannot be considered a liquor.

Vodka is a liquor because it has a minimum ABV of 40%. Spirytus Vodka, which is the brand with the highest alcohol content in the market, has 95% ABV or 192 proof.

While vodka can be made from grapes, its traditional base ingredients are grains and potatoes. In this sense, vodka is definitely not wine-based.

If vodka is made from grapes, it can almost be considered wine-based since it undergoes the same process, only it’s distilled after the fermentation stage.

Moreover, there are distillers that have attempted to turn wine into vodka successfully. But whether a vodka is wine-based ultimately depends on its base ingredient and the distiller that generates it.

Is Wine Stronger Than Vodka?

Meanwhile, vodka’s base ingredients are fermented and distilled, therefore enabling its alcohol content to go as high as 90% or more.

To understand their difference in alcohol content better, 5 ounces of wine is roughly equivalent to 1.5 ounces of liquor, which is a standard shot in the US.

In terms of flavor, however, wine is definitely stronger than vodka. Vodka is distilled so many times that any component from its base ingredient that can give it flavor is almost completely eliminated.

Since wine is not distilled, the flavor of the grapes remains. Wine’s components continue to have chemical reactions as they age, which is why wine gets better as it gets older.

Is Vodka Beer Or Wine?

Vodka is neither beer nor wine. While all three can be made from grapes, they have different classifications, especially in terms of alcohol by volume (ABV) and flavor profile.

Nevertheless, beer and wine skip the distilling process which is integral in making vodka, and vodka isn’t necessarily aged because it can’t undergo many chemical changes.

When a base ingredient like grapes is distilled enough times, the impurities that produce tastes and aromas are removed, and the alcohol content reaches 40% or more.

Afterwards, the pure ethanol is diluted in water so that there’s a ratio of 40% alcohol and 60% water. This ratio could change with vodkas that have higher proof.

Moreover, vodka production is more lax compared to beer and wine production since it can be made from almost any food and its components are basic.

On the other hand, wine undergoes fermentation and is aged at once. Due to the fact that it skips the distillation process, more attention is given to its base ingredient.

Similarly, beer undergoes fermentation and is aged, but it’s mostly made from barley, wheat, and corn instead of grapes, and then hops are added to induce its bitter flavor.

Like wine, beer can be aged, but whether the resulting flavor is better depends on your preference.

For these reasons, vodka cannot be classified as beer or wine under any circumstances.

If you want to learn more about vodka, you can see our related posts on whether vodka is made from grapes, if vodka is from Russia, and if you can drink vodka straight.

Vodka is not a wine and it cannot be classified as one under any circumstances. Even if both are made from the same type of grapes, their ABV and flavor profiles are too different.

Additionally, grapes weren’t used to make vodka until recently. Grains like rye and wheat remain the most popular base ingredients for vodka.