When you think of orange juice, you immediately imagine the citrus groves in the Sunshine State of Florida.

Is Florida The Leading Producer Of Orange Juice?

Florida is the leading producer of orange juice in the United States because 90% of America’s orange juice supply comes from Florida.

Additionally,  Florida orange juice comes second only to Brazil since Brazil is responsible for 30% of the worldwide orange juice supply.

Is Florida The State Where Orange Juice Was Invented?

Oranges have been present since the 17th century, but oranges were considered a luxury and later on consumed raw as a treatment for scurvy.

Florida orange juice started when oranges became too abundant and farmers were cutting down 30% of their citrus trees to deal with the extra crop.

With all the waste happening and supply not slowing, several Florida-based producers looked for ways to consume their oranges.

One of these producers is California Fruit Growers Exchange, which hired the services of an ad man named Albert Lasker.

How Was Orange Juice Invented In Florida?

Albert Lasker started by renaming the company that hired him into Sunkist and thought of ways to improve citrus consumption.

With this idea, Albert Lasker started the ‘Drink an Orange’ Campaign in Florida. Lasker advertised that orange juice is ‘healthfulness itself’ and sold these fruits by the bundle.

In 1967, the Legislature has announced that orange juice is the designated state drink of Florida, meaning Florida orange juice represents the state of Florida.

Moreover, Florida is the place where frozen concentrate orange was formulated, which was a hit during the time.

What Percentage Of Florida Oranges Is Processed Into Orange Juice?

95% of Florida oranges are made into orange juice, and 87% of these oranges are processed into frozen concentrate, canned, or chilled oranges. 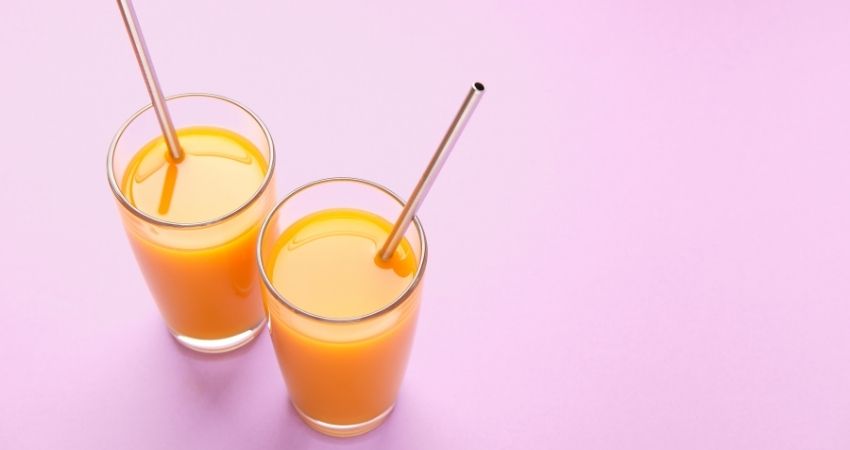 Both Florida and California grow the same variants of oranges, such as Valencia, Navel, Hamline, and Pineapple Orange.

However, the oranges are not consistent in taste because of the difference in climates.

California has a mild and dry climate which makes Californian oranges develop thicker peels, so California orange juice is sweeter and stays fresh for longer.

On the other hand, Florida has hot and humid weather which creates oranges with thin peels and juicy flesh, and the Florida oranges create a tarter juice.

What Orange Juice Is 100% From Florida?

Natalie’s Orchid Island Juice Company is a women-led organization that aims to give clean orange juice that is minimally processed to its consumers.

Is Tropicana Made From Florida Orange Juice?

All oranges extracted to create Tropicana orange juice are produced in the United States with the majority of the oranges coming from Florida’s local growers and family-owned groves.

Tropicana orange juice is made mostly from Valencia oranges but also includes other variants depending on the season. Therefore, Tropicana may use oranges that come from California.

As a fourth-generation citrus grower, you can be certain that Uncle Matt’s Organic orange juice comes from Florida.

Simply Orange juice is manufactured by the Coca-Cola Company and does not contain 100% orange juice from Florida.

Instead, Simply Orange released a statement that claims their orange juice comes from USA, Brazil, and Mexico because Coca-Cola is adamant about using “in-season” orange juice all year round.

Read our related articles to learn why we drink orange juice in the morning, how many oranges make a cup of juice, and if orange juice curdles milk.