Soy sauce is a versatile sauce that can be used in many ways for tons of recipes around the world.

You may not like salty food and wonder why soy sauce is so salty. I did the research, and here are the facts I found!

Why Is Soy Sauce So Salty?

Soy sauce is salty because one of the main ingredients of soy sauce is salt since salt acts as a preservative to keep the soy sauce fresh for a long time. Originally, soy sauce was used to stretch salt, hence why soy sauce has a heavily salty taste. Moreover, salt is a flavor enhancer, making the overall flavor of soy sauce tastier.

Are you still wondering why soy sauce has a lot of salt, what less salty soy sauce alternatives there are, and more? Keep on reading to find out!

Does Soy Sauce Contain A Lot of Salt?

Soy sauce contains a lot of salt, having around 878.9 milligrams per tablespoon. Each brand of soy sauce will have a different amount, but soy sauce is generally high in salt.

Most soy sauces contain a lot of salt because salt is one of the main ingredients of soy sauce, which are soybeans, wheat, water, and salt.

Why Does Soy Sauce Contain A Lot of Salt?

Originally, soy sauce was made as a way to stretch salt since salt used to be very expensive, so soy sauce helped make foods saltier without using as much salt.

Fermenting foods intensifies the flavors while releasing new flavor compounds, which is why soy sauce became an excellent way to stretch salt.

Moreover, soy sauce contains a lot of salt because salt helps preserve the soy sauce since salt reduces the water activity in foods.

Water in foods is the perfect place for bacteria to grow, causing mold and food to spoil quickly. Soy sauce contains a lot of salt in the liquid, making it difficult for bacteria to multiply.

Additionally, salt is a flavor enhancer that makes foods taste better, so many manufacturers will add salt to their soy sauce.

Is Soy Sauce Salty or Savory? 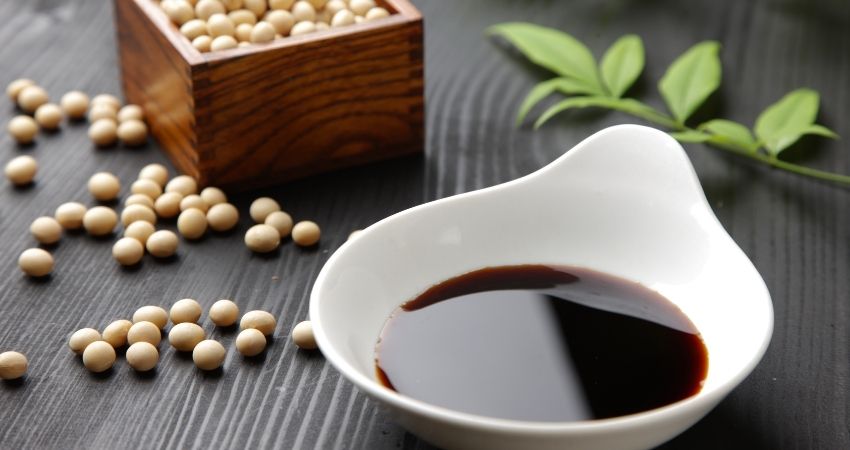 Soy sauce is both salty and savory because they are the main flavors you will taste from soy sauce.

Salt is the main ingredient in soy sauce, giving soy sauce a salty flavor, while savory flavors develop from the fermentation process.

How Do You Fix Salty Soy Sauce?

A simple way to fix salty soy sauce is to counteract the saltiness with another flavor like sweet. You can add a bit of sugar or honey into your recipe to balance out the salty flavors.

How Do You Dilute Salty Soy Sauce?

You can thoroughly mix a bit of water with your soy sauce to dilute the soy sauce, and you may replace the water with other liquids like lemon juice, rice wine, vinegar, sesame oil, and such.

If you do not want to have soy sauce and want something less salty, here are some substitutes that you can try!

Coconut aminos are made from coconut sap and salt, creating a savory and salty flavor profile with a bit of sweetness.

Liquid aminos are a type of liquid protein concentrate made from treated soybeans, making liquid aminos similar to soy sauce but without fermentation.

While liquid aminos taste similar to soy sauce, liquid aminos have a sweeter and milder flavor than traditional soy sauce despite having a similar salt content.

However, miso paste is still quite salty but you can control how much miso paste you want to put into your recipe by diluting the miso paste with water.

You will also want to be sparing when you add miso paste to a recipe if you want a less salty taste, so it is best to add a little at a time.

Dried mushroom sauce is a sauce made from soaking dried shiitake mushrooms in water for a few days, creating a mild and not salty liquid that is similar to soy sauce.

Anchovies are a naturally salty and pungent fish, but when used properly anchovies can work as a not-so-salty substitute for soy sauce.

Plus, anchovies have savory flavors, making anchovies a good replacement for soy sauce when you’re in a pinch.

If you want to use anchovies instead of soy sauce, mince 1-3 small anchovies finely to create a fine paste and mix the minced anchovies into your recipe.

However, anchovies only work in recipes with thick sauces, such as a stew or a curry, because the anchovies will blend well into the sauce.

Take a look at our related articles to learn about what shoyu soy sauce is, what yellow bean sauce is, and what double fermented soy sauce is.

Soy sauce contains a lot of salt because soy sauce was originally meant to be salty, and the salt acts as a flavor enhancer and preservative to make the soy sauce tastier and last longer.

There are less salty substitutes to soy sauce that you can try like coconut aminos to get a similar yet less salty flavor profile.