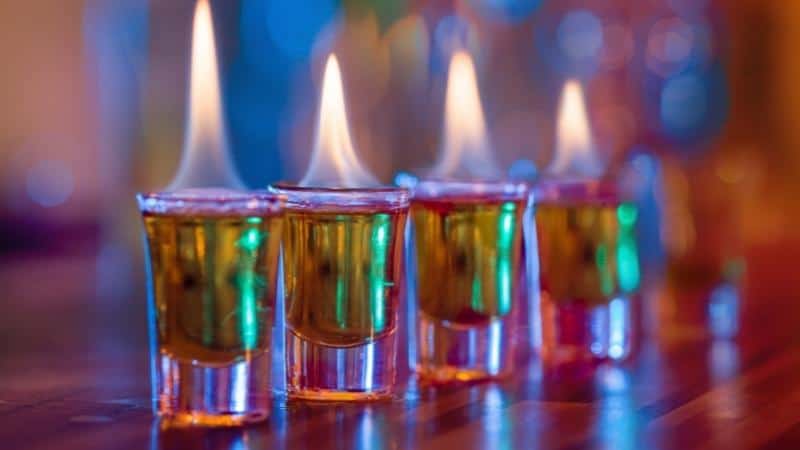 Many people prefer vodka over other spirits, but that doesn’t mean they hate the burning sensation it causes any less.

If you’re into vodka but are worried about the burning you feel in your mouth, throat, and stomach, you might be wondering why it causes that sensation. Here’s what I found!

Why Does Vodka Burn?

Vodka burns because its alcohol content disrupts the heat receptors in your mouth by lowering its activation threshold. When you drink vodka, your receptors act up at 34°C, which is lower than the average body temperature of 37°C. In reality, you feel the burn, not because of the vodka but because your receptors think your temperature is too high.

If you want to learn more about the burning sensation that vodka causes, whether it’s normal, and how to deal with it, keep on reading!

Is It Normal For Vodka To Burn?

Whether it’s normal for vodka to cause a burning sensation when consumed depends on the degree of burning you feel.

While all distilled spirits like vodka with a proof of 80 or higher would normally produce a burn, there’s a difference between the ones caused by top-shelf and bottom-shelf vodkas.

Contrary to popular belief, top-shelf vodkas aren’t limited to expensive vodka brands. You can purchase affordable vodka and the taste would be smooth with a minimal burn.

On the other hand, bottom-shelf vodkas are those that are distilled poorly and thus cause excessive burning that can be too much to bear for most people. In that case, drinking vodka would be more agonizing than pleasurable.

Should the vodka you drink cause too much burning or pain, consider the brand and the ingredients used. You might be drinking bootlegged vodka with harmful or illegal content.

Why Does Vodka Burn Your Mouth And Throat?

Put simply, you feel “the burn” due to the alcohol concentration in the beverages you drink. When the concentration is higher, the more intense the burning is.

On a more scientific level, vodka causes a burning sensation because alcohol compromises your heat receptors by lowering their tolerance.

This makes your receptors believe that your average body temperature which would normally be 37°C is too high and that you’re probably burning.

In reality, the burning sensation isn’t a response to the booze but to the erroneous perception of your body temperature.

Moreover, high concentrations of alcohol irritate the mucous membrane lining inside your mouth, as well as the delicate lining of your esophagus.

This irritation could come off to your brain as a burning sensation and you’ll notice that it’s similar to the one you feel when you eat hot peppers.

What’s more, alcohol is a solvent and it steals the moisture from the lining of your mouth and makes it dry which you may again perceive as burning.

Why Does Vodka Burn My Stomach?

Vodka causes a burning sensation in your stomach because some of the alcohol doesn’t pass through your intestines or is absorbed into your bloodstream.

Instead, residual alcohol can remain in your stomach and increase its acidity. When your stomach has too much acid, its protective lining gets irritated. This irritation gets perceived by the brain as a burning sensation.

Additionally, vodka’s alcohol content can cause your blood vessels to dilate. Dilated blood vessels can also cause that burning sensation in your stomach.

How Do You Make Vodka Burn Less?

You can make vodka burn less through a variety of methods.

One of the most common ways to reduce vodka burn is by putting it in the freezer. Although vodka won’t freeze, it will be cold enough to make the burning manageable.

As a rule of thumb, the colder a distilled spirit like vodka is, the lesser the burn, which is why vodka is best consumed chilled or with ice.

Another great way to reduce vodka burn is by mixing it with fresh fruit juice. Vodka is an excellent mixer and almost every beverage tastes great when combined with it.

Lastly, you can add mineral water to your vodka to cut it. Apart from diluting the alcohol enough to lessen the burn, mineral water also enhances the natural botanicals of vodka.

However, if you want to enjoy your vodka neat without suffering from any burning sensation, stick with top-shelf brands.

Top-shelf brands are produced by distillers that make vodka using high-quality distillery methods, thereby reducing any aggressive tastes their vodka may have.

Here are some of the top-shelf vodkas you can drink straight without having to endure painful burns:

If you want to learn more about vodka, you can see our related posts on the pH level of vodka, whether vodka is strong, and if vodka is the strongest alcohol.

Vodka causes a burning sensation because of the effect its alcohol content has on your heat receptors and blood vessels.

When you drink alcohol, your heat receptors lower their activation threshold from 42°C to 34°C, which is lower than the average temperature of the human body.

Recognizing that your body is now “too hot,” your heat receptors signal that you’re burning up by giving you a burning sensation as you down your vodka.

That said, not all vodkas cause painful burning. Top-shelf brands are known to provide a more pleasurable drinking experience with a minimal burn.