Tenderizing meat before you cook is an excellent way to add flavor and make the meat softer. However, you may be wondering what other pantry items can be used to tenderize meat, like soy sauce.

Well, you do not have to wonder about what soy sauce can do any longer. I have gathered all the facts about soy sauce tenderizing meat, and here is everything I learned!

Soy sauce tenderizes the meat by breaking down its tough proteins known as myosin and leaving it with excellent moisture retention. Additionally, soy sauce is typically mixed with other ingredients to create a marinade in which the meat is soaked and tenderized before cooking.

Are you wondering about how soy sauce tenderizes the meat, how to use soy sauce to tenderize meat, and more? Well, keep on reading to find out!

How Does Soy Sauce Tenderize Meat?

Soy sauce breaks down myosin, a tough protein in meat, thereby tenderizing it.

When the proteins in meat are broken down, the meat will not contract as much while cooking and will instead retain a softer texture.

Soy sauce can tenderize the beef and is commonly used in beef recipes that require softer meat like beef stir-fry, steak, and more.

Soy sauce can tenderize chicken but you will need to use less of it because chicken has softer meat that can quickly absorb flavors and you do not want to overpower the dish with soy sauce.

Soy sauce tenderizes pork similarly to other meats by breaking down the tougher proteins in it.

However, you may want to pair the soy sauce with other tenderizing ingredients like lemon juice as pork is much tougher than beef and chicken. Soy sauce alone may not be enough to tenderize it.

Soy sauce can tenderize seafood very easily because seafood absorbs flavor quickly. However, you will need to marinate seafood in soy sauce for a much shorter time than other meats.

How to Use Soy Sauce To Tenderize Meat 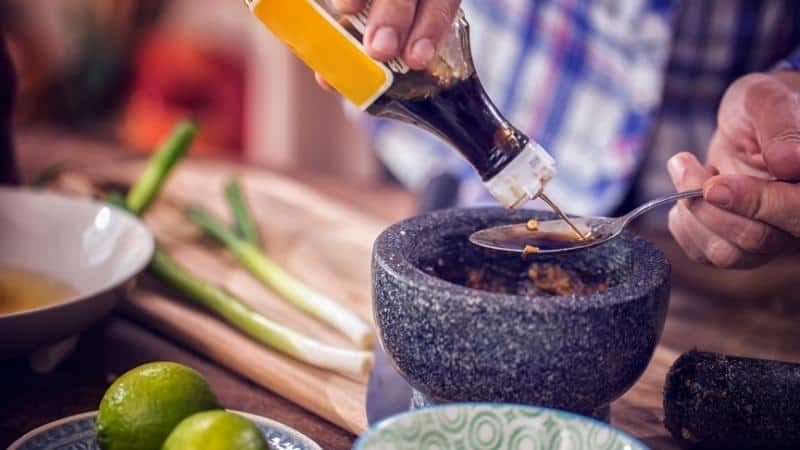 Are you wondering how you can use soy sauce to tenderize meat? Here is an easy step-by-step guide you can follow to tenderize meat. You can also tweak the recipe to suit your personal preferences.

Make sure to wash your meat before you cook it, using paper towels to blot it dry. The meat should be dry because water will dilute the flavors of your marinades and other flavor enhancers.

Choose a recipe with soy sauce to marinate your meat. Some basic ingredients you may find in a soy sauce-based marinade include olive oil, lemon juice, spices, and such.

Mix the ingredients together in a bowl.

Get a bowl that is large enough to mix your meat around, not just hold it. That way, you will have enough room for mixing.

Add your washed and dried meat and marinade into the bowl, mix, and cover.

If you are marinating your meat for 15-60 minutes, you can leave it in a covered bowl on the counter. However, you need to refrigerate the meat if you want to marinate it for longer than 1 hour.

How Long Should I Marinate Meat In Soy Sauce?

How long you marinate meat in soy sauce will depend on what you are marinating.

Seafood only needs 15-30 minutes to marinate, and it should never marinate for longer than 1 hour. On the other hand, lamb and pork can marinate for 4-8 hours.

Most chicken only needs 1-2 hours to marinate, but many recipes will suggest marinating it overnight in the fridge.

Beef can marinate for much longer than most meats, especially if you have a tough part of beef. Most beef recipes will suggest that you marinate the meat for 24 hours or longer in the fridge.

Do I Have To Throw Away The Soy Sauce Marinade?

Marinade should typically be thrown out after it touches meat because of the potential bacteria. However, it can have other uses before being discarded.

For instance, after marinating the meat, you can use the soy sauce marinade to baste it while cooking.

Additionally, you could boil down the marinade into a sauce. But it is important to note that improperly cooked marinade can be dangerous to consume.

Moreover, you should not reuse marinade for marinating more meat as bacteria will have had time to settle and grow in it.

If you want to learn more about soy sauce, you can see our related posts on what soy sauce tastes like, why soy sauce is black, and whether soy sauce is gluten-free.

Soy sauce is an excellent ingredient people use to tenderize meat.

This is because soy sauce contains a lot of salt which helps break down myosin, the tough proteins found in meat. As a result, the meat becomes soft and tender.