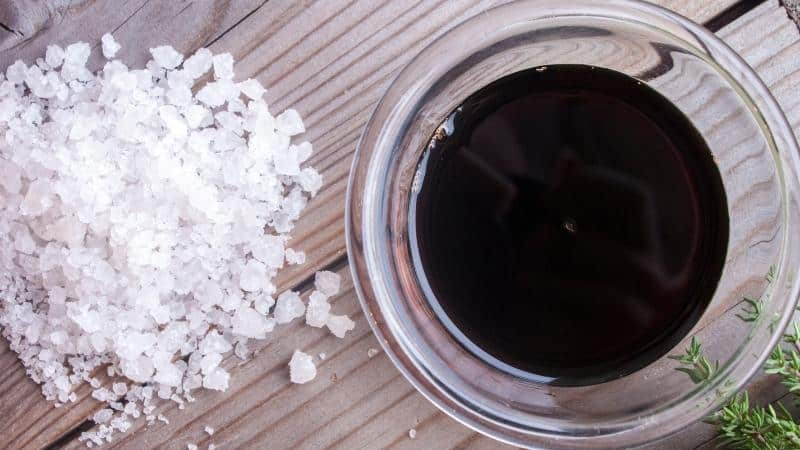 Soy sauce is a fantastic ingredient often used to bring dishes to life. Its salty and umami flavors are particularly sought-after especially when attempting to replicate Asian cuisine.

A taste of this condiment might have you wondering whether soy sauce has salt in it. I did the research, and here’s what I found!

Does Soy Sauce Have Salt In It?

Are you wondering why soy sauce has salt in it, what soy sauces don’t have salt, and more? Keep reading to find out!

Why Does Soy Sauce Have Salt In It?

Salt is the main ingredient for traditional soy sauce because it boosts the overall flavor of soy sauce.

Additionally, salt is an excellent preservative that makes food last longer, which is why soy sauce can last for 2-3 years. The sodium present in it can keep mold from growing.

Bacteria and mold grow in damp and moist environments such as food and products that have a lot of water. The high salt content of soy sauce can delay the growth of this mold and bacteria.

Moreover, chemically processed soy sauce usually has salt in it because it doesn’t taste good without it. The chemical process takes out the fermentation process, leaving the end product with a bland flavor.

Does Kikkoman Soy Sauce Have Salt In It?

Kikkoman soy sauce has salt in it because it is one of the four main ingredients. Moreover, there are no added preservatives so the salt functions as a natural preservative.

Does Dark Soy Sauce Have Salt In It?

Most dark soy sauces have salt in them to enhance the flavor and preserve the product. Dark soy sauces often have more salt than other kinds of soy sauce because they are meant to be salty.

Does Light Soy Sauce Have Salt In It?

Does Low Sodium Soy Sauce Have Salt In It?

However, low sodium soy sauce still has a good amount of salt, typically around 600 milligrams per tablespoon.

Does Tamari Soy Sauce Have Salt In It?

Tamari soy sauce has salt in it and it is fairly high in sodium. Despite this, it still does not have the same flavor as dark soy sauce because it is not as salty and it has more umami flavor.

Soy sauce can replace salt in many recipes because saltiness is one of the main flavors of soy sauce.

Additionally, soy sauce can enhance certain dishes better than salt because it has other flavors. It can add umami, sweet, and rich flavors to recipes. But it can also overpower recipes if you are not careful.

Does Soy Sauce Have More Sodium Than Salt?

No, soy sauce has 6 times less sodium than salt.

Soy sauce is not as concentrated as plain salt. While it can be a good way to bring a bit of salt and other flavors to a dish, you may need to add more of it if you want to replace salt.

What Soy Sauce Has No Salt In It?

There are no soy sauces without salt in them because most manufacturers add salt to their soy sauces.

There are a few alternatives that you can use for soy sauce if you want low salt soy sauce. While it is hard to find an alternative that has 0% sodium, you can try out these options:

Coconut aminos are a vegan, soy-free, and gluten-free soy sauce substitute with a bit of salt, having around 90 milligrams of sodium.

Coconut aminos can replace soy sauce because they are dark in color with umami and salty flavors. However, they are milder than soy sauce and have sweeter notes, so they are not a perfect substitute.

Worcestershire sauce can be used to replace soy sauce to season food because it has umami and salty flavors. Additionally, it can give your dishes a darker color like soy sauce does.

Kikkoman low sodium soy sauce gives you the same flavors and color as traditional soy sauce but with less salt.

However, it still contains more salt than the other alternatives mentioned earlier, having around 575 milligrams of sodium per serving.

Salt is in almost all soy sauces because it helps preserve the product to make it last longer. It also provides some of its flavors.

However, there are some alternatives you can use that have a lot less salt than most soy sauces.