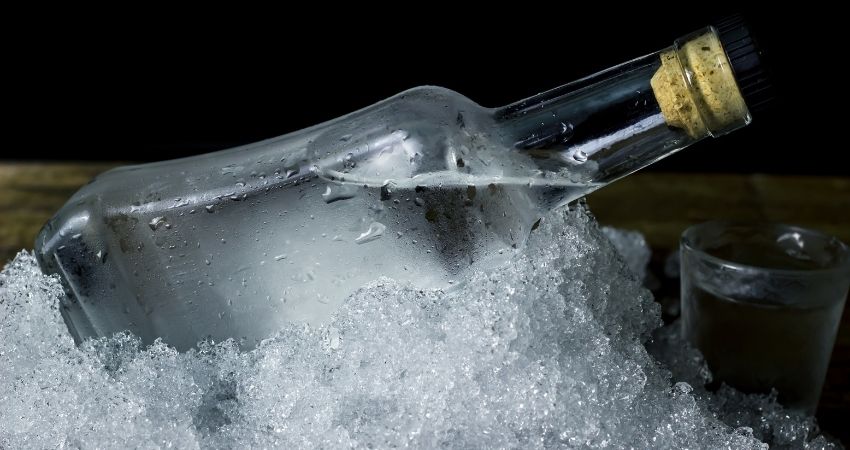 To preserve the quality of your vodka or mellow out vodka’s alcoholic taste, your first instinct might be to store all of your vodka bottles in the freezer.

However, if you noticed that one or two vodkas developed icicles or froze solid in the bottle while others did not, you might be wondering why your vodka freezes. I looked into it, and here is what I found!

Why Did My Vodka Freeze?

Vodka can freeze for several reasons. However, given most vodka’s high alcohol content, vodka would not normally freeze in a regular home freezer. In case your vodka froze at home, it could be because the vodka is counterfeited or watered down in the bottle. Additionally, your home freezer’s temperature could be too low or has the capacity of a commercial freezer.

If you are curious to learn more about what conditions cause vodka to freeze and whether your favorite vodka brands will freeze in your home freezer, keep reading!

Why Does Vodka Not Freeze?

Vodkas are typically bottled at 80 proof, giving the vodka a high alcohol content. Since ethanol has an extremely low freezing point, ethanol also brings down the freezing point of the water it is mixed with.

This is the reason why, even though vodka is 60% water and only 40% ethanol, the vodka will not freeze solid or develop icicles in a regular home freezer.

What Temperature Does Vodka Freeze?

Nonetheless, the freezing point of specific vodka brands can vary slightly, especially when it comes to flavored vodkas.

Why Does Vodka Not Freeze In The Freezer?

Your vodka does not freeze in a domestic freezer because the temperature is not low enough or your vodka has a proof higher than 80.

However, if you have an above-average refrigerating unit or a commercial one, you can expect that setting the temperature really low will freeze your vodka.

Diluted vodka will freeze, but the temperature at which the vodka will do so depends on the ratio of water to alcohol.

Some diluted vodka brands sell their vodka at a minimum of  21% ABV, which means the vodka will require a much higher temperature than 80 proof vodka to freeze.

Can A Small Amount Of Vodka Freeze?

A small amount of 80 proof vodka would still be made up of 40% ethanol and 60% water, so a bit of vodka will not freeze. Ultimately, it depends on the proof of the vodka and whether the vodka is diluted.

How Much Water Will Make Vodka Freeze?

Adding water to vodka can make it freeze at a lower temperature, but the amount of water necessary to do this depends on the proof of the vodka you are using.

Generally, it would take a lot of water to lower the ratio of water to ethanol and increase the vodka’s freezing point. There is no universal amount that applies to all 80 proof vodkas. 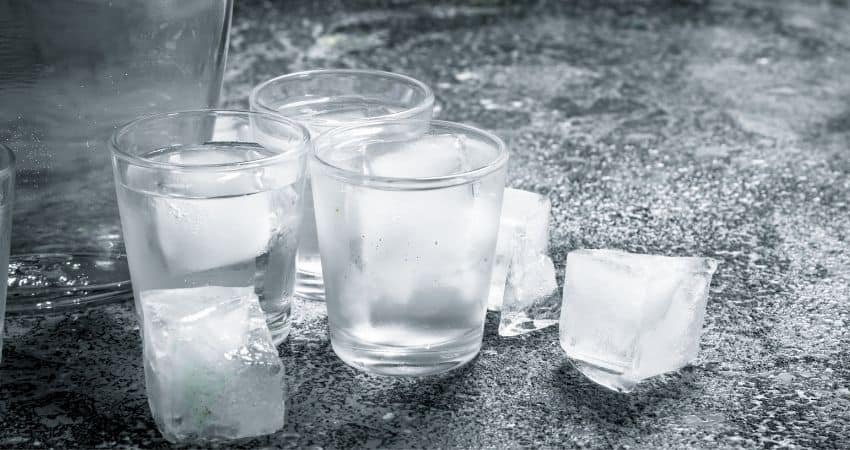 Even cheap vodka, if the vodka contains 40% ABV, will not freeze in a regular domestic freezer. Nonetheless, if that cheap vodka has been watered down, cheap vodka ill freeze.

Ultimately, it depends on how much the cheap vodka has been tampered with.

Does Watered Down Vodka Freeze?

Watered-down vodka may freeze if the resulting vodka has significantly more water than ethanol content.

However, adding only a small amount of water to an 80 proof vodka will not suffice to increase the vodka’s freezing point by a huge margin.

Two of the factors that affect a flavored vodka’s ability to freeze are the vodka’s proof and sugar content.

Most flavored vodkas are bottled at 30% to 35% ABV to accommodate their sugar content. With a lower proof and a higher sugar content, the higher the vodka’s freezing point will be.

Nevertheless, there are a lot of flavored vodkas in the market that are bottled at 80 proof and have no sugar, giving them nearly the same freezing point as most unflavored vodkas.

Does Vodka Freeze When Mixed With Juice?

Vodka can freeze at a higher temperature when mixed with beverages like fruit juices since doing so will increase the vodka’s water and sugar content.

With more water and sugar than alcohol, the higher the freezing point of the drink compared to the typical unflavored vodka.

Additionally, Smirnoff comes in a wide variety of flavors and varying proofs ranging from 60 to 100. As such, their freezing points will vary.

Tito’s Handmade Vodka is bottled at 80 proof and does not come in any flavors. If you store a bottle of Tito’s vodka in your freezer, the vodka likely will not freeze until you lower the temperature.

Pinnacle Vodka comes in different formats ranging from 70 to 100 proof. Whether Pinnacle Vodka will freeze depends on the type of Pinnacle you buy and your freezer’s capacity.

Take a look at our related articles to learn if Kirkland Vodka is Grey Goose, how to drink vodka straight, and what rosé vodka is.

If you find your bottle of vodka frozen after being stored in your freezer, it could either be because the vodka has been watered down or your freezer’s temperature is too low.

However, regular domestic freezers are not normally set at a temperature that can freeze an 80 proof vodka.

In case your freezer’s temperature is only set at 0°F to -18°C and the vodka freezes, you have to consider if your vodka is fake.