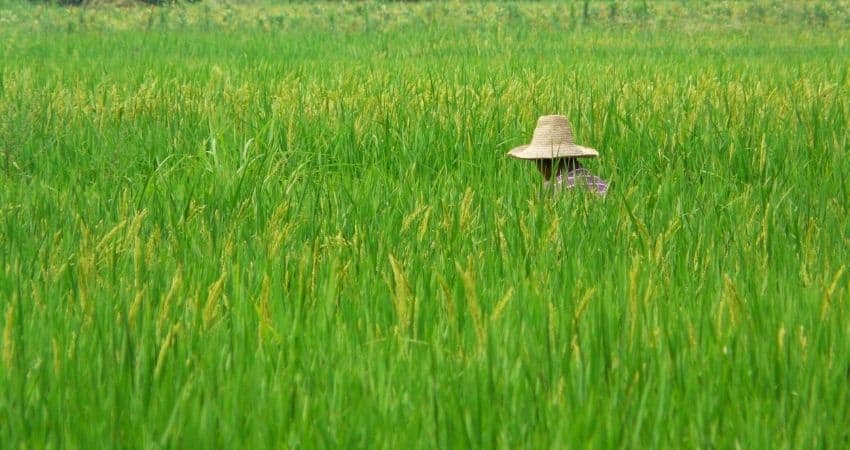 Rice continues to be one of the most traded commodities in the world. After all, there are plenty of communities that rarely let a meal pass without consuming rice.

With such high demand for rice, it is natural to wonder where rice grows. I looked into it, and here’s what I found!

Where Does Rice Grow?

Rice grows in several countries all over the world. Currently, 90% of rice comes from Asia, and the remaining 10% comes from Europe, America, and Australia. Additionally, China remains the largest producer of rice in the world followed by India, which is also the leading exporter of rice. In Europe, Italy and Spain are the biggest rice producers.

In case you’re curious to learn more about which countries produce rice and what the ideal terroir for growing rice is, keep reading!

Where Does Rice Grow In The World?

Around 90% of the world’s rice supply comes from Asia. Here’s a list of the top rice-producing Asian countries in the past years:

In terms of the quantity of milled rice produced, Brazil comes next to Pakistan on the list.

Some of the most notable rice-producing European countries are Italy and Spain, followed by Portugal, Romania, Greece, Russia, France, Bulgaria, and Hungary.

Who Is The Largest Exporter Of Rice?

Next to India are Vietnam, Thailand, Pakistan, and America.

What Are The Top 10 Rice Producing States

Here’s a list of the top ten rice-producing states in India:

As for America, there are reportedly six rice-producing states. Here’s a list based on the order of the quantity they produce from highest to lowest:

What Is The Rice Capital Of The World?

Many countries have been named the rice capital of the world. Nevertheless, based on production alone, that title rightly belongs to China.

Where Does Black Rice Grow?

Other countries that produce black rice are Thailand, Bangladesh, Vietnam, and Indonesia.

Where Does Brown Rice Grow?

Brown rice is grown primarily in India, Thailand, and Bangladesh.

Unlike other rice variants, brown rice is versatile in terms of terroir. While brown rice mainly grows in saline areas, brown rice can naturally adapt to different climates and soil varieties.

Where Does White Rice Grow?

White rice grows in many countries around the world, but the top producers of white rice are China and India.

Generally, white rice can grow in different kinds of climates and irrigated land, whether lowland, upland, or rainfed lowland, among others.

Ideally, the soil on which white rice grows is silt loam and heavy clay, as these types of soil tend to retain a lot of water.

Where Does Basmati Rice Grow?

Where Is Canilla Rice Grown?

Where Does Wild Rice Grow Naturally?

Generally, this is because wild rice isn’t actually a grain, but the seeds of aquatic grass, consequently giving wild rice a grassy and earthy flavor.

Moreover, there are cultivated varieties of wild rice that are produced in Canada, California, Minnesota, Wisconsin, and California.

Where Does Wild Rice Grow In Canada?

Wild rice grows in waterways and marshlands in southern Canada, specifically in Manitoba and along the way to the Atlantic Ocean.

Where Does Wild Rice Grow In Ontario?

Wild rice is grown in the aquatic areas in Manitoba, Saskatchewan, Northern Ontario, and the waters of the Great Lakes region.

Moreover, wild rice has been grown there for such a long time that harvesting them by hand has become an annual tradition for the Sioux and Chippewa Indians.

Where Does Wild Rice Grow In Minnesota?

Since wild rice comes from aquatic grass, wild rice naturally grows in the shallow waters of the lakes in northern and central Minnesota.

Where Does Red Rice Grow?

Red rice is produced mainly in Bhutan, but red rice variants can also be found in places like India, Madagascar, tropical Africa, and southern Africa.

Where Is Red Rice Grown In India?

In India, red rice is produced in the Brahmaputra Valley of Assam. Additionally, no chemical fertilizers are used in growing their red rice.

Where Is Jasmine Rice Grown?

Among the variants of Jasmine rice, it’s Thai Jasmine and Cambodian Jasmine that share the most number of similarities, mainly because they are grown near one another.

However, it is Thai Jasmine rice that is mostly exported to Europe and Northern America, with a small percentage coming from Vietnam.

Bamboo rice, which is technically the seeds of a dying bamboo and not a grain, is produced in countries like Myanmar, China, and India where bamboos grow in abundance.

Where Is Bamboo Rice Grown In India?

In India, bamboo rice is grown mainly in Odisha. While Odisha also cultivates other rice variants, Odisha is known mainly for harvesting the exotic bamboo rice.

Where Does Rice Grow In Mexico?

In Mexico, rice is produced mainly in Nayarit, Sinaloa, Michoacán, Morelos, Campeche, Tabasco, and Veracruz, which are in the Northwest, Southcentral, and Southeast regions.

Is Rice Grown In Italy?

Italy produces the most quantity of rice in Europe, having dedicated 250,000 hectares of cultivation area to grain production.

Additionally, most of the rice varieties produced in Italy are japonica ecotype because of Italy’s temperate climate.

Can Grow Rice In Oregon?

Oregon produces wild rice, which isn’t technically a grain, but a seed. For years, wild rice has been cultivated in the Willamette Valley because of its nutrient-dense soil

Can You Grow Rice In Florida?

In Florida, most of the rice is produced in Hendry County and Palm Beach County.

Since Florida has a long growing season, rice plants can be harvested twice by letting the crop regrow after the first harvest.

Can You Grow Rice In Texas?

Texas produces around 7% of America’s rice supply. Additionally, most of the rice Texas grows is in Matagorda, Wharton, and Colorado Counties.

Can You Grow Rice In Colorado?

Rice is difficult to grow in Colorado due to its semi-arid environment. However, a local horticulturist did succeed in growing rice in La Platta County in 2013.

Whether Colorado plans to pursue this breakthrough is not yet clear. Currently, rice is still not grown in Colorado the way it is grown in states like Arkansas and California.

Can You Grow Rice In England? 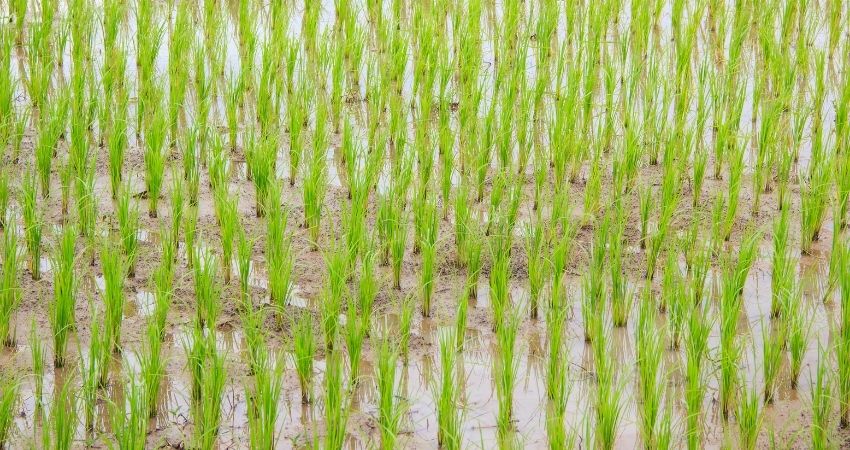 England cannot produce rice because of the extremely cold weather it experiences, and the same can be said for the rest of Britain.

As such, Britain buys their rice from neighboring European countries, but most of its supplies are shipped from Asia.

Some of these countries are Vietnam, Pakistan, Spain, Italy, and Thailand.

Where Is Rice Grown In Australia?

Most of the rice grown in Australia comes from southern New South Wales, and the rest are produced in Western Australia, Queensland, and the Northern Territory.

Furthermore, the type of rice that grows in Australia is mostly medium-grain rice, and the other rice variants are exported from other countries.

Why Is Most Rice Grown In Asia?

A lot of Asian countries have the ideal terroir for growing rice. While rice can be versatile, rice tends to grow best in tropical places that experience sufficient heat and rainfall.

As such, it is countries like Vietnam, India, Thailand, and the Philippines that cultivate rice crops.

While China has extreme winters, it also has plenty of fertile regions that experience hot summers, making it easy for China to produce rice in massive quantities.

Where Does Rice Grow Best?

Rice grows best in regions that have prolonged sunshine, sufficient irrigation, and high humidity, which is why rice is produced mainly by tropical countries.

While different rice variants have different requirements, most types of rice generally need long warm seasons and soil that can hold a lot of water to survive and yield a good crop.

What Type Of Land Does Rice Grow In?

Rice grows best in a land that can hold water well. Generally, farmers will select land that has silt loam and heavy clay soils to support the irrigation rice needs.

While clay and silt are terrible choices for growing other types of grains, they retain just enough water to grow a semi-aquatic crop like rice.

What Climate Do You Need To Grow Rice?

Growing rice is best in regions that have hot and humid climates. Generally, the longer the warmer seasons last, the better the environment the rice will have.

Over the years, however, even places that do not have warm climates can grow rice if they can recreate the ideal terroir, temperature, and heat exposure for the rice.

Can Rice Grow In Cold Climates?

Traditionally, rice cannot be grown in cold climates. However, with the help of technology, there have been breakthroughs in yielding rice even in regions with cold temperatures.

Rice is a semi-aquatic plant. As such, rice can be partially submerged in water and partially exposed to the surface.

However, rice is not a root crop, which means the rice grains themselves aren’t cultivated under the soil.

Instead, rice grows on top of the crop and hangs over the water, not in it.

Can You Grow Rice Indoors?

Technically, it’s possible to grow rice indoors given that you provide the rice with the right environment.

In place of a marsh, you can plant rice in an aquarium and use grow lights to provide sufficient light and head to the crop.

Can I Grow Rice In My Backyard?

Technically, it is possible to grow rice in your backyard. However, it’s extremely difficult to grow enough rice for a single meal if you don’t have enough backyard space.

Generally, to grow enough rice for food, you’ll need not only enough space, but the right soil, continuous irrigation, and a warm season that will nurture the rice for at least 160 days.

Can I Grow Rice From The Store?

If the grains you buy from the store are fresh enough, it may be possible to grow rice from them.

To increase your chances of success, it is best to buy organic long-grain brown rice.

Have a look at our related articles to discover what Calrose rice is, what yellow rice is, and what Mexican rice is.

Rice is a sought-after commodity all over the world. At present, China and India are the top producers of rice and are responsible for much of the world’s rice supply.

Generally, rice needs a warm climate to grow, which is why rice usually comes from tropical countries like Vietnam, Cambodia, and the Philippines.

Among European countries, Italy and Spain produce the most rice, and they are two of the countries that make up the 10% of the world’s rice supply that doesn’t come from Asia.