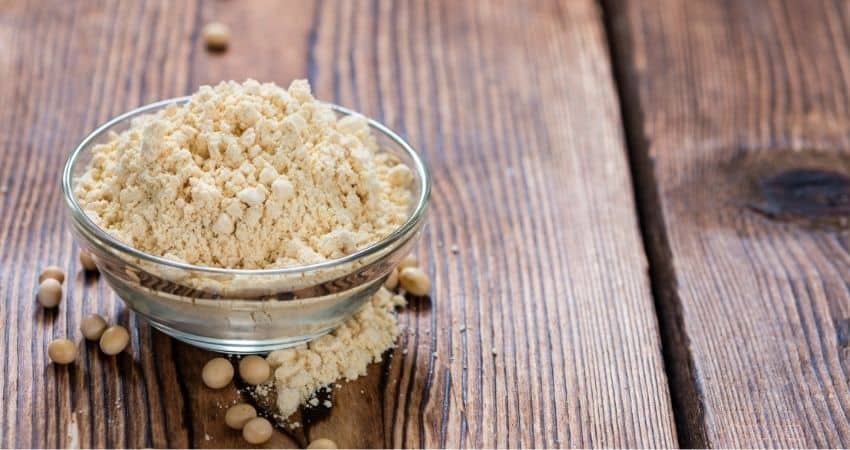 Normally, most people think that flour is only made from wheat but that is far from the truth. However, there are tons of flour made from non-wheat ingredients, such as soya flour.

If you have never tried soya flour before, you may be wondering what soya flour is and what you can do with soya flour. I did some digging, and here is what I found!

What Is Soya Flour?

Soya flour is a type of flour made from ground soybeans. However, the exact type of soybean will depend on the type of soya flour, which will also impact the flavor of your soya flour. Generally, soya flour is used in baking recipes like bread recipes, but soya flour may also be used as a thickening agent.

Do you want to learn what soya flour tastes like, if soya flour is the same as soy flour, and what you can substitute for soya flour? Keep reading!

What Is Soya Flour Made Of?

Generally, soya flour has a somewhat bean-like flavor to it, but this will vary on the type of soya flour you have. For instance, roasted soya bean flour tastes nutty and toasted.

What Is Soya Flour Used For?

Soya flour can also be a beneficial ingredient to add to bread recipes. Soya flour can enhance the crumb’s softness and bread’s volume while improving the overall handling of the bread dough.

Plus, soya flour is great as a thickening agent similar to how all-purpose flour or cornstarch work. Therefore, you can use soya flour to thicken stews, soups, and more.

Why Is Soy Used In Baking?

Generally, soy is used in baking because of the protein content, but that does not directly mean soy is added for health benefits. Instead, soy is often added because soy can enhance baked goods.

For example, soy proteins are excellent because soy proteins improve the overall texture and consistency of baked goods. Moreover, soy proteins help gel and bind a lot of water, which can enhance the moisture content of baked dishes.

Is Soya Flour The Same As Soy Flour?

Normally, soya flour can be considered the same as soy flour. This is because “soya” is a word used to call soy in certain countries, meaning the two are interchangeable.

However, soya flour is not to be confused with soya powder, which is a very different ingredient. Soya powder is significantly finer than soya flour, and soya powder features a stronger flavor.

How Is Soya Flour Made? 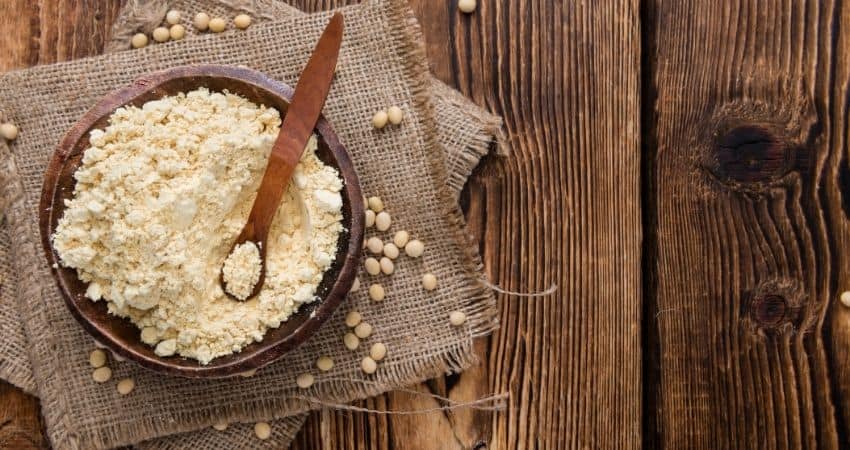 How soya flour is made will mostly depend on the type of soya flour you have. However, most types of soya flour will use soybeans that were first boiled or roasted and then dehulled.

Does Soya Flour Have Gluten?

Generally, most types of soya flour do not have gluten. This is because soya flour is made from ground soybeans, which are naturally gluten-free.

Look at the ingredients on the packaging of your soya flour to see if it says “may contain gluten.” This is because the soya flour could be made in a factory where gluten-containing products are made, which could contaminate your soya flour.

Normally, deciding if soya flour is better than wheat flour will mostly depend on what you need the flour for. Soya flour and wheat flour are made from different ingredients, so you will get different results in your recipes.

Generally, recipes that require a lot of gluten will benefit better from wheat flour. However, people who are allergic to gluten can replace some of the flour with soya flour.

Despite having different traits, soya flour and wheat flour can work together. Many people like to add some soya flour to wheat flour-based recipes to improve the overall recipe.

What Is A Substitute For Soya Flour?

If you need soya flour as a thickening agent, you can opt for chestnut starch or cornstarch. Keep in mind that these starches are better used in smaller amounts, so add a little at a time to avoid making your dish too thick.

Have a look at our other articles to find out what semolina flour, sorghum flour, and sweet rice flour.

Soya flour is flour created from ground soybeans, which may be boiled and dried or roasted before being ground. Normally, soya flour tastes somewhat like beans, but other variants like roasted soya flour will taste a bit nutty and toasty.

Typically, soya flour is used in baked goods as a substitute for wheat flour. However, soya flour contains soy proteins that can enhance the overall structure and texture of baked goods, especially for bread recipes.