Flour is one of the most versatile ingredients you can have in your kitchen, but there is more to flour than regular wheat flour. A wide variety of flour exists in the world, and one unique flour you can try is sesame flour.

If you have never heard of sesame flour before, you may be curious as to what sesame flour is and how you can use it. I did some digging, and here is what I discovered!

What Is Sesame Flour?

Sesame flour is flour made from ground sesame seeds, and the type of sesame seeds used will depend on the manufacturer. Usually, sesame flour tastes nutty and sweet, which is similar to how almond flour tastes. Typically, you can use sesame flour in many recipes that need gluten-free flour, and some examples include bread, cookies, cakes, and more.

Do you want to find out how sesame flour is made, what you can use instead of sesame flour, and more? Keep reading!

What Is Sesame Flour Made Of?

What Is Sesame Flour Used For?

Normally, the main purpose of sesame flour is as an ingredient in baking, especially if you want to make a gluten-free baking recipe. Sesame flour’s flavor can pleasantly enhance the overall taste of most dishes.

However, it is important to remember that sesame flour can absorb a lot of liquid. Therefore, you may need to add more liquid to your recipe to compensate.

How Is Sesame Flour Made?

Does Sesame Flour Have Gluten?

This is because some manufacturers will create gluten-free products in factories that make gluten-containing products. Therefore, there is a chance that gluten can contaminate your sesame flour unless the manufacturer states otherwise.

Can I Substitute Sesame Flour For Almond Flour?

Can I Substitute Sesame Flour For Coconut Flour? 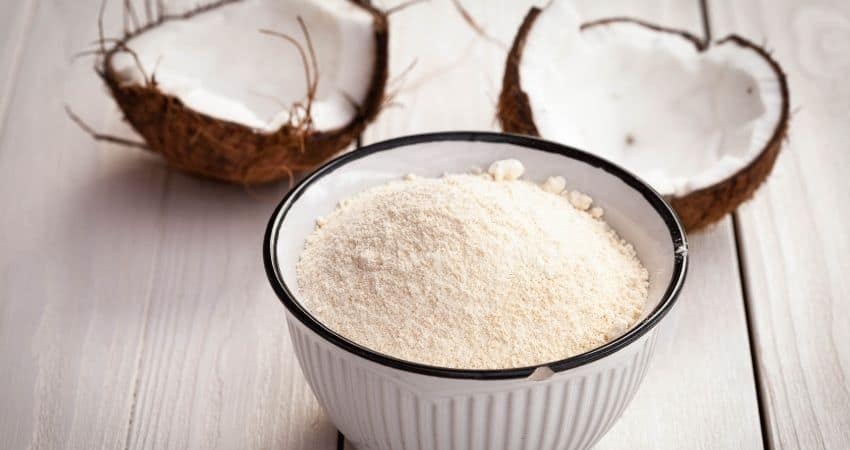 Usually, sesame flour can be considered keto-friendly because sesame is low in carbs. Typically, most variants of sesame flour contain 34 grams of carbs per cup, which is much lower compared to other kinds of flour.

Typically, deciding if sesame flour is better than wheat flour will most depend on your preference and the recipe you are making. You cannot directly compare these two flours since they have different traits.

For instance, people with gluten intolerances will prefer sesame flour because wheat flour has gluten. On the other hand, it is easier to bake with wheat flour, especially since many recipes need gluten to rise.

What Can I Substitute For Sesame Flour?

Normally, almond flour is the best substitute for sesame flour, especially if you want another gluten-free flour. Almond flour and sesame flour are both mildly sweet and nutty, so you will not notice much difference in taste.

Another good replacement for sesame flour in most recipes is coconut flour. However, it is important to note that you will distinctly taste coconuts in your recipe, and you will not get any nutty notes from coconut flour.

If you want to find out what sweet potato flour is, what seasoned flour is, and what stone ground flour is, read our related articles.

Sesame flour is a type of flour made from defatted sesame seeds, which are sesame seeds with the oil removed. Most people state that sesame flour tastes like almond flour, which is nutty and sweet.

Generally, you can use sesame flour in almost any recipe that calls for gluten-free flour, especially if it is a baking recipe. Moreover, sesame flour is often used as an alternative to almond flour.