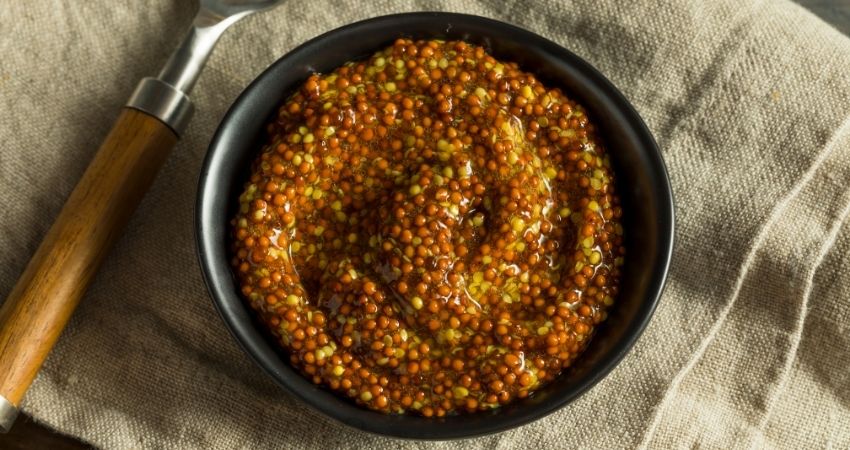 While mustard is loved by everyone, there is one that graced the tables of French royalty, which was Pommery mustard.

However, you may not know a lot about this mustard and are wondering what Pommery mustard is. So let’s check out the facts below!

What Is Pommery Mustard?

Pommery mustard is the finest type of whole-grain mustard made exclusively in Meaux, France and the ingredients of Pommery mustard have been kept a secret for centuries by the Pommery family. Pommery mustard comes packaged in a sandstone jar or pot, and the cover is topped with a red wax seal, which is essential for longevity.

How did this mustard come to be loved by the culinary big shots? What makes it so popular? Here’s what you need to know!

Pommery mustard has a well-balanced, vinegary, rich, nutty flavor. When described, Pommery mustard is said to have the perfect balance of all flavors of the tongue.

Pommery mustard has a strong pungency, which is the perfect pair for ham, beef, and chicken.

What Is The Origin Of Pommery Mustard?

Charlemagne, in 771 AD, said that monks and other religious servants in cathedral towns should start to cultivate and produce mustard, thus starting the history of mustard production in most towns.

J.B. Pommery, a stonecutter in the town of Meaux in 1760, was entrusted with the recipe by one of the Meaux cathedrals monks.

Once J.B. Pommery got the recipe, it started the production of what is called Pommery mustard with the original recipe still used today.

Other surrounding towns have tried to imitate and make their own version of the Pommery mustard, but it did not last long. Meaux has been the only one who has retained popularity up until now.

What Is Pommery Mustard Made Of?

What makes Pommery so notable is the quality of even the most basic ingredients since nothing is mediocre or so-so when it comes to the production of their mustards.

How Do You Open A Jar Of Pommery Mustard?

Packaged in a white sandstone pot, the top of a Pommery mustard jar is covered with a red wax seal done the traditional way around the rim of the jar.

To open the jar, you need to break the wax seal, using the back of a knife or a spoon to break the edges of the wax until only the middle is left.

Next, brush away the broken fragments of wax so they don’t fall into the mustard when you open the jar.

Separate the wax seal from the rim of the jar and lever the cork stopper out from the jar. While the process is a bit complicated, the Pommery mustard is now ready to use.

What Is a Pommery Fireman’s Mustard?

Pommery Fireman’s Mustard is a strong blend of the classic french Pommery mustard and hot chili peppers, incorporating the classic flavor of Pommery with the strong kick of heat.

Additionally, the Pommery Fireman’s Mustard has won medals at the Worldwide Mustard Competition, proving that Pommery mustard is unbeatable.

How Do You Store Pommery Mustard? 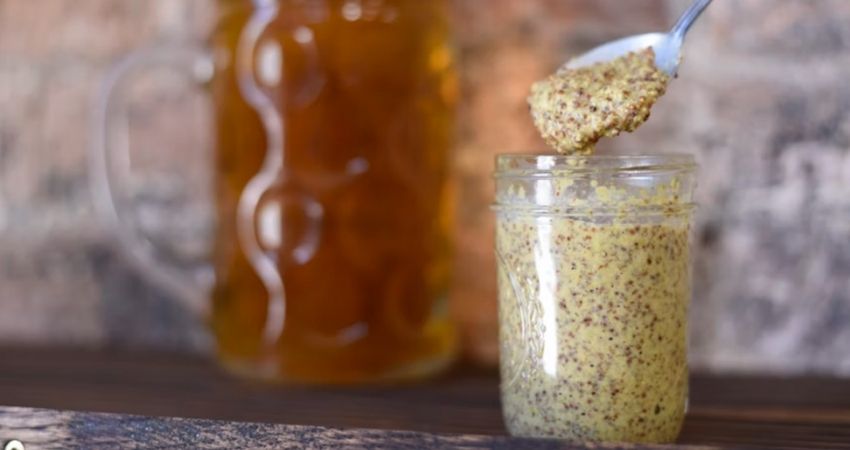 French quality extends up to the packaging, which is why so many people rave about this mustard.

Pommery mustard’s wax seal not only adds a touch of traditional elegance but also helps contain the flavor and freshness longer.

You can easily keep Pommery mustard for 2 years without refrigeration when stored properly.

Pommery mustard’s stoneware jar prevents UV light and any light from passing through keeping the mustard fresh and dry longer.

What Is Pommery Mustard Paired With?

Great with cheese, pretzels, and crackers, Pommery mustard is a big hit for charcuterie boards and dips during dinner parties because of Pommery mustard’s texture and taste.

Additionally, Pommery mustard is used as a spread on baguettes and sandwiches with chicken or ham when you want a tangy bite to an otherwise bland snack.

Moreover, chefs in the US and France like to add this mustard to roasts and sauces, as well as using Pommery mustard just for a condiment to pair with meats.

Plus, sausages and hotdogs are almost always perfect with mustard, but adding Pommery mustard takes the flavor and quality up a notch.

Check out our related articles to find out what mustard seeds are, if mustard is fermented, and if mustard goes bad.