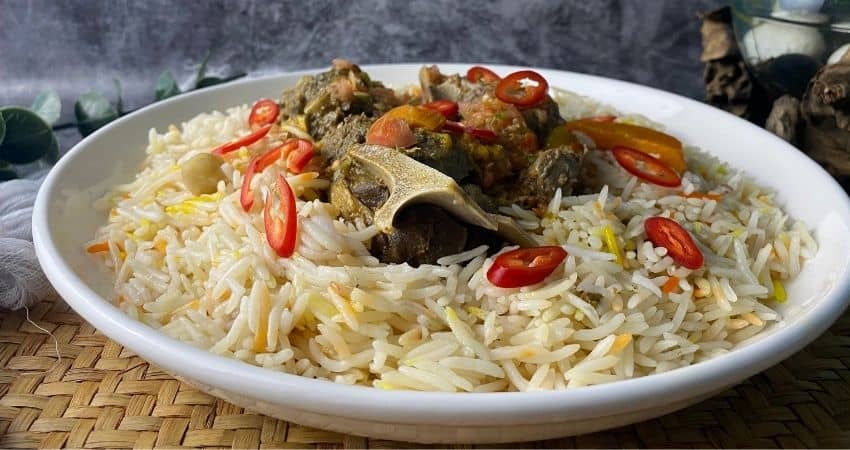 Exploring different rice dishes is a great way to appreciate different cultures and such is the case when you eat Mandi rice.

If you haven’t had the chance to eat Mandi rice before, you might be wondering what Mandi rice is and whether you’ll like Mandi rice. I looked into it, and here’s what I found!

What Is Mandi Rice?

Mandi is a Yemeni dish that consists of rice and meat. Additionally, Mandi rice refers to the rice incorporated in Mandi. Contrary to popular belief, Mandi rice is not a rice variant because Mandi rice is white rice seasoned and cooked with meat. Typically, the rice used to make Mandi is Basmati rice.

In case you’re interested to learn more about how Mandi rice is prepared and what makes Mandi rice a beloved dish in many countries, keep reading!

Where Did Mandi Rice Come From?

Mandi came from Hadhramaut, Yemen, and is a rice-based dish that is consumed in several regions throughout the Arabian Peninsula.

Consequently, the rice eaten with Mandi is called Mandi rice.

Additionally, Mandi rice is so popular that a lot of places in the Arabian Peninsula consider Mandi rice a staple dish.

Mandi rice is not a type of grain. Rather, Mandi is a dish made of rice and chicken that has been seasoned with a wide variety of spices.

If aromatic rice is unavailable, any long-grain or medium-grain rice is acceptable as long as they are not overly sticky.

How Is Mandi Rice Made? 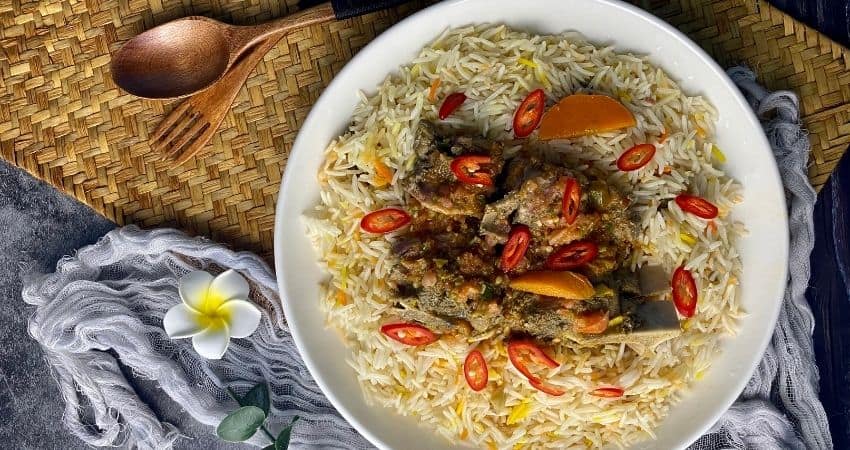 To make authentic Yemeni Mandi, it is critical to prepare a delicious spice mixture. There are no strict rules about which spices to use, but there are staples you shouldn’t miss.

Mix the spices with freshly squeezed lemon juice and two tablespoons of olive oil. Afterward, use the mixture to coat the chicken then marinate the chicken overnight if possible.

To make the rest of the dish, saute chopped onions and then add garlic paste, tomato puree, and two tablespoons of the spice mixture. Next, add the chicken and cook for half an hour.

What Is Mandi Rice Made Of?

Mandi rice is typically made of aromatic long-grain rice, chicken, and several spices like cumin, turmeric, black pepper, and cardamom.

Usually, Mand is prepared using a combination of at least a dozen spices along with lemon juice, butter, and chopped onions.

Additionally, you can use other types of meat to serve with Mandi rice including beef and seafood.

Mandi rice is cooked with the broth of several spices and the meat that the Mandi rice is paired with. As such, Mandi rice can have different tastes depending on the recipe used.

Generally, however, Mandi rice is a combination of salty, spicy, and tangy, with the meat providing a fine umami flavor.

Traditionally, Mandi is not a vegetarian dish. Even Mandi rice cannot be considered vegetarian because Mandi rice is cooked with chicken broth.

While it’s possible to replace the meat products with vegetarian alternatives, likely, the Mandi rice will no longer taste like traditional Mandi.

Mandi rice tends to be a little spicy. However, the spiciness of Mandi rice depends largely on the spices you use and how much you use.

Typically, Mandi rice is flavored with black pepper, cumin, and cardamom, which are responsible for most of the spiciness of Mandi rice.

For extra spiciness, consider adding green chiles to your Mandi rice too.

What Is The Difference Between Mandi And Biryani?

While Mandi and Biryani may have similar ingredients, they are not prepared the same way.

Meanwhile, Biryani is cooked through “dumming”, which is when meat is marinated and cooked with semi-cooked rice.

When the ingredients are not prepared via dumming, the dish is not considered Biryani.

What Is The Difference Between Kabsa And Mandi?

Mandi is a traditional Yemeni dish, while Kabsa is the national dish of Saudi Arabia. Additionally, Mandi has yellowish rice and Kabsa has brownish rice.

Mandi’s yellow color is derived from saffron spices, and Kabsa’s brown color is due to the meat broth with tomato paste and chilies it’s mixed with.

Moreover, Kabsa has a predominantly lemony and spicy flavor. In contrast, Mandi has a more nuanced flavor, ranging from salty and spicy to tangy and umami.

What Do You Serve With Mandi Rice?

Mandi rice is traditionally eaten with chicken, although it’s acceptable to use beef and seafood. Additionally, you can serve Mandi rice with pickled onions and raw mango raita.

If you want the option to make your Mandi rice spicier, you can always serve Mandi rice with hot sauce in a separate bowl.

How Many Types Of Mandi Rice Are There?

Generally, the main difference between each type of Mandi is the way they are prepared, especially when it comes to cooking the meat.

If you want to learn what Matta rice is, what malted rice is, and what Masoori rice is, read our related articles.

Mandi rice is the rice served when cooking the traditional Yemeni dish, Mandi.

While Mandi is similar to other Yemeni and Saudi Arabian dishes in terms of ingredients and appearance, Mandi distinguishes itself in the way it is cooked.

Traditionally, Mandi rice is eaten with baked chicken, and the Mandi rice is cooked in chicken broth and the same spices used to season the chicken.