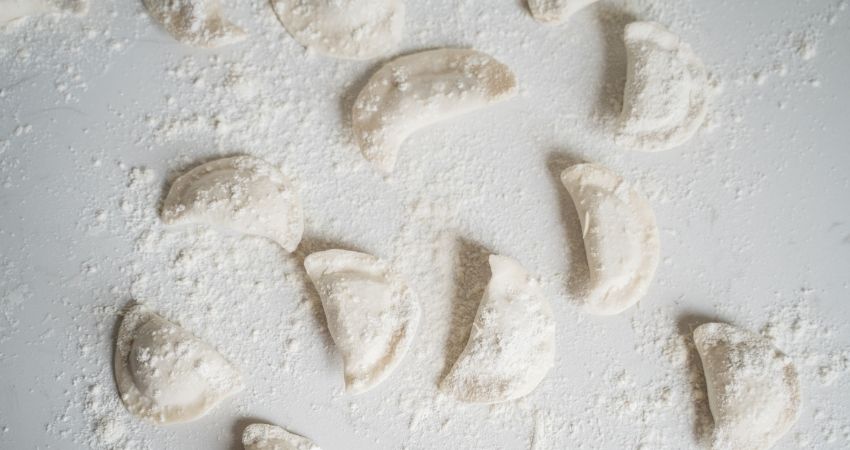 If you want to make dumpling dough, you may have heard of dumplings flour but may wonder what dumping flour is. I did the research, and this is what I learned!

What Is Dumpling Flour?

Do you want to learn more about what different types of dumplings are made of, if dumpling flour has gluten, and more? Keep reading!

What Is Dumpling Flour Made Of?

Generally, dumpling flour is made from wheat flour, but the exact type of flour used to create dumplings will depend on the dumpling recipe.

Many countries create different types of dumplings that are popular within their cultures. Therefore, each dumpling recipe will require a specific type of flour to suit the recipe.

What Is Dumpling Flour Used For?

As you can guess from the name, dumpling flour is used to create dough for dumplings because the dough will encapsulate various kinds of fillings.

What Flour Are Dumplings Made Out Of?

Flour used to make dumplings will heavily depend on the recipe you are making, but most dumpling recipes will call for some form of wheat flour.

For example, a sheng jian bao is a slightly large dumpling with a slightly thick and very soft bread-like dough, and most recipes will use all-purpose flour.

What Flour Do Traditional Dumplings Use?

Can Dumplings Be Made Of Rice Flour?

Normally, most dumplings are not made of rice flour because wheat flour is more commonly used to make almost all dumplings. However, it is possible to use rice flour for certain dumpling recipes especially if you want to make gluten-free dumplings.

Although it is common to mix rice flour with other types of gluten-free flour to enhance the texture, especially if you want a chewier dumpling dough.

For instance, rice flour can be used with psyllium husk powder and tapioca starch to create gluten-free dumpling wrappers.

What Is The Best Flour For Chinese Dumplings?

For example, if there are ten grams of protein in one cup of your flour, your flour has 10% gluten. If your flour’s nutrition facts are not exactly a cup, you can easily calculate it for yourself to see the total amount of protein per cup of flour.

What Is The Best Flour For Japanese Dumplings?

Can You Use Plain White Flour For Dumplings?

Can You Use Bread Flour For Dumplings?

It is possible to use bread flour for dumplings, but bread flour will only apply to certain dumpling recipes.

For instance, cha siu bao and siopao are very large dumplings that have a very thick dough. Therefore, bread flour may be acceptable to use, but your dough will be a little heavier.

Can You Use 00 Flour For Dumplings?

You can use 00 flour to make dumplings, especially if your dumpling recipe requires high gluten levels. 00 flour usually contains around 14% gluten, which will create a very elastic dough for your dumplings.

Does Dumpling Flour Have Gluten?

Have a look at our related articles to discover what defatted soy flour is, what donut flour is, and what fufu flour is.

Dumpling flour is any type of flour that is used to make dumplings but since there are so many kinds of dumplings, dumpling flour’s ingredients can vary.