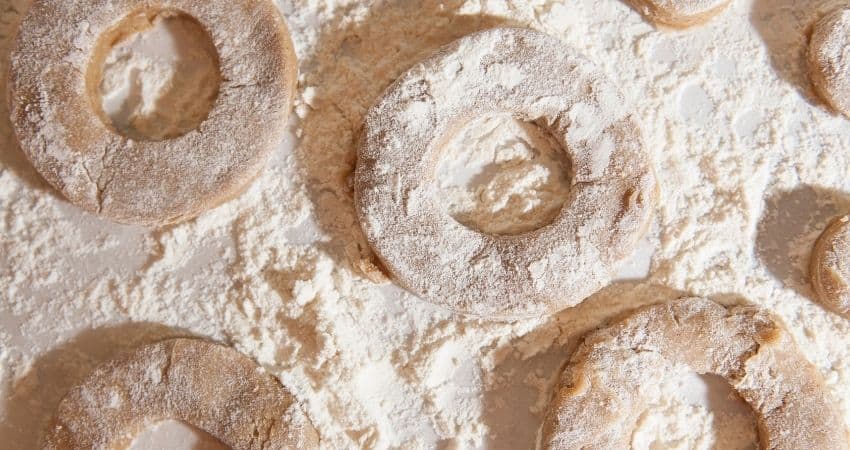 Donuts are a tasty treat that is loved around the world. While you can have donuts be virtually any flavor, one thing remains the same and that is that donuts are almost always made from flour.

If you want to try making donuts at home, you may be wondering what donut flour is. I did the research, and this is what I learned!

What Is Donut Flour?

Donut flour is a term used for any kind of flour used to create donuts. Generally, the type of flour you should use for donuts will depend on what donut recipe you are making. Bread flour is often used for yeast and raised donuts while all-purpose flour is better used for cake donuts.

If you want to find out what is the best flour for donuts and what makes donut dough different, keep reading!

What Is Donut Flour Made Of?

Generally, there is no specific ingredient used for donut flour. Donut flour simply refers to any type of flour that is used to make donuts.

What Type Of Flour Is Used For Donuts?

Typically, the type of flour used to make donuts will depend on what kind of donuts you are making. However, all-purpose flour is commonly used to make most variants of donuts, especially cake donuts.

However, raised or yeast donuts recipes will better benefit from high protein flours because these flours will offer more elasticity. For instance, bread flour will have enough protein for raised donuts.

What Is The Best Flour For Donuts?

Choosing the best type of flour to use for donuts will heavily depend on the recipe you are making. However, all-purpose flour will be best your best bet for most donut recipes, especially since you can add other ingredients to it.

For example, let us say that you are making a yeast donut recipe. You can add vital wheat gluten and yeast to your all-purpose flour to make it similar to bread flour.

Why Is Baking Soda Used To Make Donuts?

Baking soda is a crucial ingredient in raised or yeast donut recipes because baking soda helps the donuts rise. When mixed with an acid, such as buttermilk, baking soda breaks down to make gas carbon dioxide, which causes a “rise.”

Do Donuts Use Yeast? 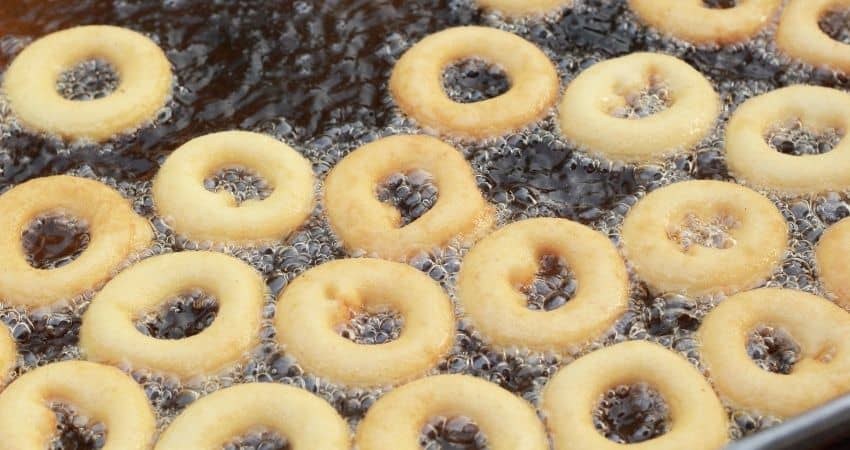 Donuts do use yeast, but only when they are yeast donuts. Generally, yeast donuts require yeast because yeast is what will leaven the donuts.

However, not all donuts require yeast for leavening. For instance, cake donuts will be better off with baking soda and baking powder, which are chemical leaveners.

Does Dunkin Donuts Use Yeast?

Among the seven ingredients used to make donuts, yeast is one of them based on the information we have available.

Does Krispy Kreme Use Yeast?

Krispy Kreme does use yeast in their donuts, but only for the yeast variants. Some other Krispy Kreme donuts use chemical leaveners instead for their cake donuts.

Why Are My Donuts Not Fluffy?

Occasionally, donuts become stiff or not fluffy because they are under-proofed. This means that the dough cannot puff up when fried, which means you need to allow your donut dough to proof more.

Typically, donuts taste like yeast because there was too much sugar combined with the yeast. Excessive sugar will cause the yeast to grow too much or too quickly.

Why Did My Donut Not Rise?

For example, your yeast may be old, which can occur even if you bought a new box of yeast. Therefore, it is important to test your yeast before you use the yeast in your recipe.

To test your yeast, mix warm water with a pinch of sugar and yeast then let the mixture sit for roughly 10 minutes. If your yeast works, the yeast should smell like bread and be foamy.

Another reason why your donut did not rise could be because the water was either too cold or too hot. If you have a recipe for donuts that has yeast, the yeast needs to be activated at the right temperature.

Generally, active dry yeast will require a liquid temperature of 110-115°F to activate. If the liquid is too cool the yeast will not bloom while boiling water will kill the yeast.

Is Cake Batter And Donut Batter The Same?

For instance, most recipes will call for cake flour to make cakes. Cake flour usually only has 7-9% protein, which creates a very soft texture.

On the other hand, donut dough tends to be fairly elastic, especially if bread flour was used. This creates a much firmer texture.

Typically, cake batter is never used to make donuts because cake batter will create extremely soft and crumbly donuts. Normally, donuts should have a firmer and slightly chewier texture.

Take a look at our other articles to discover what flaxseed flour is, what durum flour is, and what the difference between bleached and unbleached flour is.

Donut flour is just a name that is used to call any flour that will be used to make donut flour. Generally, the type of flour donuts will need will depend on the recipe you make.

Most raised or yeast donuts will require bread flour along with other ingredients. Cake donuts usually utilize all-purpose flour for less gluten development.