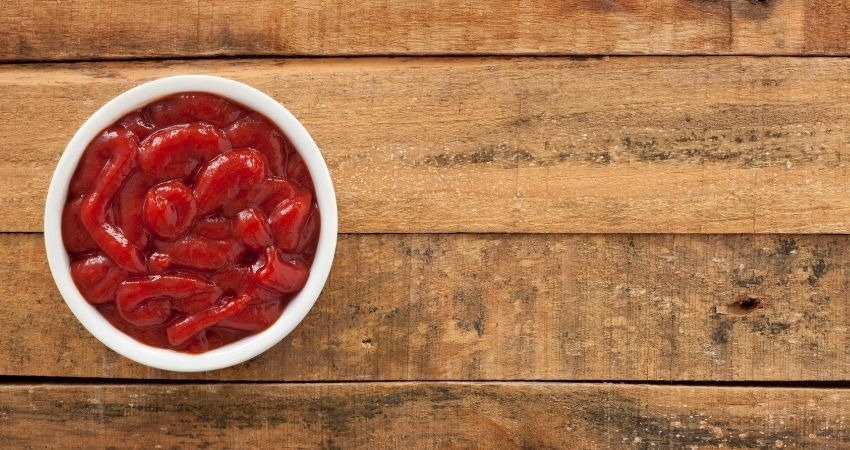 Ketchup is perhaps one of the most popular condiments used around the world since ketchup is loved by many and can be poured over many dishes.

If you are a fan of ketchup, you may be curious to learn about the types of ketchup. I compiled a list of some of the most popular kinds of ketchup, and here they are!

Possibly the most popular type of ketchup, tomato ketchup is a classic kind of ketchup that is used to accompany many kinds of food, such as french fries, fried chicken, hot dogs, and more.

After many variations of ketchup with different ingredients were made, tomato ketchup made its debut in 1812 by a Philadelphia scientist named James Mease.

Eventually, Heinz introduced a new formula for ketchup in 1876 which involved vinegar as a flavor enhancer and preservative, thus making vinegar an essential ingredient in almost every tomato ketchup recipe.

Since its invention, tomato ketchup slowly became the most popular form of ketchup around Europe and the USA where tomato ketchup is still commonly used today.

Based on many reports, Heinz is the most popular brand for tomato ketchup because Heinz was noted to have the best overall texture, flavor, and appearance compared to other ketchup brands.

When Americans were traveling to the Philippines, the Americans introduced many foods to the Filipinos, including ketchup.

Maria Orosa opted to use a local crop from the Philippines, which was bananas and added red dye to the crop to make the bananas look like tomato ketchup.

Blueberry ketchup is another unique type of ketchup that opts for blueberries over tomatoes, creating a deep purple sauce that tastes fruity and bright while featuring a jelly-like texture.

Most types of ketchup that you find will not be spicy, which is why brands like Heinz have made hot variants of ketchup, which includes jalapeno ketchup.

Normally, jalapeno ketchup still contains tomatoes in it, unlike blueberry ketchup and banana ketchup that replace the tomatoes since only a bit of jalapeno is added for spice.

Similar to jalapeno ketchup, some people may be bored with regular tomato ketchup, which led to brands like Huy Fong creating sriracha ketchup.

Sriracha ketchup is a delightful mixture of sriracha, which is a tangy, sweet, spicy, and garlicky hot sauce with ketchup.

Normally, ketchup and sriracha mix well together because they are both red sauces with similar textures, allowing the sauces to blend seamlessly.

Sriracha ketchup tends to be a bit sweeter than jalapeno ketchup because sriracha is already sweet.

While ketchup may not be a sugary treat, some people cannot eat ketchup due to the added sugar, which is why no sugar ketchup was invented for diabetics and weight-watchers alike.

As you can guess, no sugar ketchup contains zero sugar or sugary sweeteners to accommodate people’s needs.

While ketchup does not require sugar to be made, many manufacturers add sugar, corn syrup, and high fructose corn syrup to ketchup, which can raise blood sugar levels. 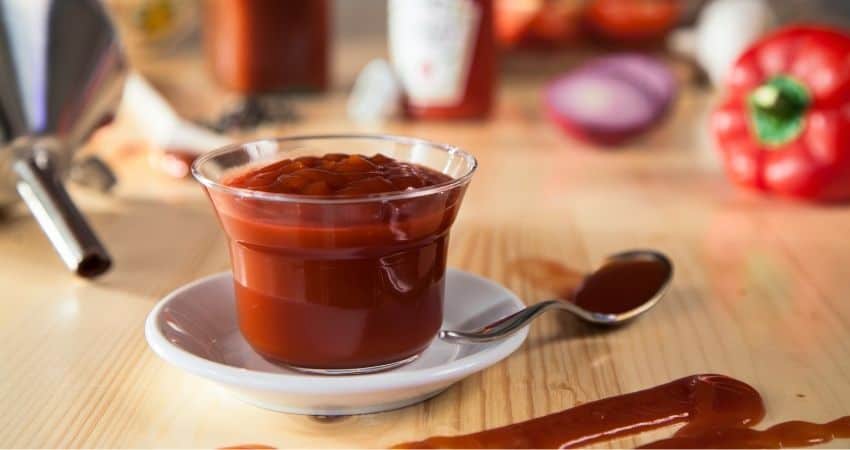 Tomato-based ketchup is one of the most popular types of ketchup, but some people are allergic to tomatoes, which is why tomato-free ketchup was created.

Moreover, some people can develop an autoimmune disease that keeps them from eating tomatoes.

Generally, tomato-free ketchup will still taste like tomato ketchup since the goal is to make it taste like regular ketchup.

If you want ketchup that packs a savory punch, you can opt for mushroom ketchup, which is another old type of ketchup that is still made today.

Since mushroom ketchup is already savory, many people add Worcestershire sauce to boost the savoriness.

While it may be a surprise to some, tomatoes do not classify as a vegetable but a fruit, so some manufacturers have developed veggie ketchup that incorporates vegetables into ketchup.

It is safe to assume that veggie ketchup was made to encourage people to get more vegetables in their diets without directly eating vegetables.

If you want to try a more premium type of ketchup, you can opt to try truffle ketchup, which is usually a mixture of tomatoes, truffle oil, and spices.

Truffle ketchup tends to be more expensive than the other kinds of ketchup mentioned on this list since one truffle can cost anywhere from $20 to $200.

Vinegar is a crucial ingredient for most ketchup recipes and while most manufacturers opt to use distilled vinegar and white vinegar for ketchup, balsamic vinegar can make its way into a ketchup recipe to create balsamic ketchup.

However, balsamic ketchup can be excellent ketchup to use over hot dogs, burgers, etc. that you want to add a sophisticated taste to.

Not everyone is into eating processed foods, so people who want all-natural food products can grab organic ketchup instead of regular tomato ketchup.

While these tomatoes are usually still safe to eat, some people do not feel comfortable eating food that has been sprayed with chemicals.

Therefore, organic ketchup can be a great alternative if you want chemical-free tomato ketchup since organic ketchup uses tomatoes that are free of fertilizers and chemical pesticides.

Typically, the price for organic ketchup tends to be higher than regular ketchup since organic tomatoes take more time, money, and effort to grow.

Depending on the brand, bacon ketchup contains real bacon in it to create a deep flavor profile, but store-bought bacon ketchup often looks like regular ketchup.

On the other hand, homemade bacon ketchup looks very unique since bacon bits are mixed directly into ketchup.

While you can use bacon ketchup anywhere you want to put it, bacon ketchup is an excellent condiment for hamburgers, hotdogs, and more.

If you are looking for ketchup with more flavor and heat, you have to give black pepper ketchup a try since the ketchup’s sweet and tangy flavors blend well with the bold flavor of crushed black pepper.

Despite being hotter and bolder ketchup, black pepper ketchup often still contains a sweetener like cane sugar to mildly balance the ketchup’s flavor.

For those who want extremely distinctive ketchup, curry ketchup features a mixture of tangy, sweet, and spicy tastes.

Normally, curry ketchup makes an excellent addition to sausages, but you can use curry ketchup to add more flavor to otherwise neutral-tasting foods like french fries.

Typically, country ketchup has a different consistency or color from regular ketchup since each brand will use a different type of tomatoes.

Moreover, country ketchup is often sold in glass jars instead of squeeze bottles.

Check out our other articles to see a list of ketchup brands, ketchup on mac and cheese, and ketchup on meatloaf.

While ketchup may be the most popular condiment globally, tomato ketchup is not the only ketchup around.

Originally, ketchup was never even made with tomatoes since tomatoes were only used to make ketchup around the 1800s.

Since the invention of ketchup, many people have created several kinds of ketchup to suit different needs and tastes, which include banana ketchup, sugar-free ketchup, tomato-free ketchup, and more.