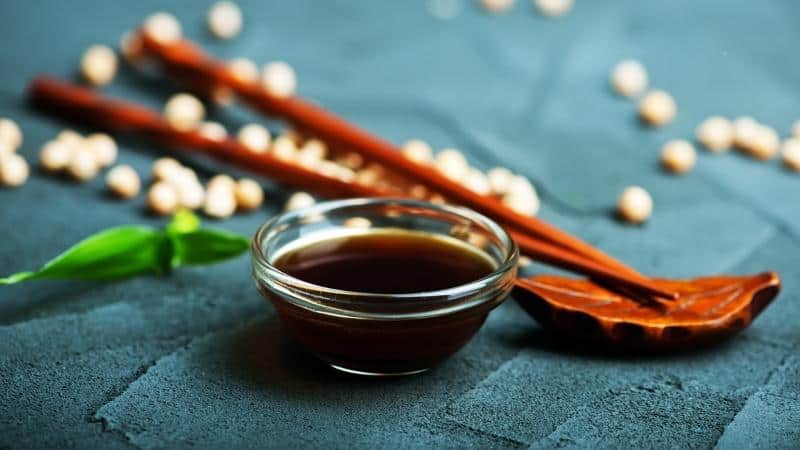 Soy sauce is a fantastic condiment that is versatile as a dip, seasoning, and much more. However, not everyone can have soy sauce. It may be due to the ingredients or the product availability.

Whatever your reason may be for looking for soy sauce substitutes, I’ve compiled a list of 23 excellent alternatives you can try!

Soy Sauce Substitute (23 Alternatives To Use)

Coconut aminos make a great substitute for soy sauce because they have similar colors, flavors, and textures. They are made from fermented coconut sap and are mixed with salt.

Despite being a sugary liquid, coconut aminos have a salty and umami flavor with a touch of sweetness. It is not as rich as soy sauce, but it does not taste like coconuts.

Coconut aminos are an ideal replacement for soy sauce because they can work as a seasoning or a dip, so you can use this for sushi, fried rice, and more.

Liquid aminos are another great alternative to soy sauce, especially if you are looking for a vegan and gluten-free option.

Liquid aminos are made by using hydrochloric acid to treat soybeans and break them down into amino acids. Baking soda is then used to neutralize leftover acid and add a salty flavor.

Unlike coconut aminos that require added salt, liquid aminos have naturally occurring salt and taste similar to mild soy sauce, featuring salty and umami flavors with a bit of sweetness.

Since they have a similar color and flavor profile to regular soy sauce, you can use liquid aminos the same way you would use soy sauce.

Fish sauce is a sauce made by fermenting anchovies with salt to create a strong, salty, and fishy condiment. You will need to use it sparingly as its scents and flavors can easily overwhelm a dish.

That being said, fish sauce can add flavor to dishes that lack salt, making it a decent substitute for soy sauce. However, it will not have any umami.

If you can’t have regular soy sauce because of a gluten allergy or sensitivity, then you can opt for tamari.

Tamari is a type of soy sauce that is traditionally made without any wheat, making it a gluten-free option, but it will still contain soybeans.

Tamari can be used interchangeably with other soy sauces in recipes as it is almost the same as traditional soy sauce.

Oyster sauce is a syrupy, rich sauce made out of oyster extract, but it does not taste fishy. Instead, the oyster sauce has umami, sweet, salty, and tangy flavors.

Moreover, the oyster sauce has a noticeably sweeter taste than soy sauce, so you may want to add salt to your recipe.

Teriyaki sauce is typically used as a glaze or marinade, and it can replace soy sauce in some dishes because it already contains soy sauce.

The ingredients of Teriyaki sauce are soy sauce, ginger, sake, and other flavorings, making it a quick substitute for soy sauce when you’re in a pinch.

While it can easily work its way into meat and poultry dishes as a soy sauce substitute, you may want to mix Teriyaki sauce with a little water first.

Hoisin sauce is a strong and fragrant sauce commonly used in Asian cuisine, and it is made out of fermented soybean paste, similar to soy sauce.

Because it is a bit sweet with a strong salty flavor, Hoisin sauce is a decent replacement for soy sauce. However, it is much richer and thicker than traditional soy sauce, so you may need to water it down before mixing it into your recipes.

If your recipe calls for 1 tablespoon of soy sauce, you can add 2 tablespoons of hoisin sauce.

This is another Japanese condiment that can replace soy sauce in certain dishes with its intense, and salty flavor.

Comparable to Maggi sauce, shoyu sauce is also a bit sweet and smells like fruit. It is also thicker than regular soy sauce and features a golden, honey-like color.

This shoyu sauce can replace soy sauce in recipes that need a bit of salty seasoning, like fried rice, stir-fry, and more.

If you cannot have gluten or soy, then you can opt for dried mushrooms to make gluten-free and soy-free soy sauce.

To do this, you’ll need to rehydrate dried shiitake mushrooms in some water until the water changes color, typically around a few days. You can then use mushroom water instead of soy sauce.

However, this make-shift soy sauce recipe will have a less concentrated flavor than regular soy sauce, so it works best in recipes that only need a little soy sauce.

Maggi seasoning sauce is another fermented condiment made from wheat proteins, giving it the same umami flavor profile as soy sauce.

You can use Maggi seasoning sauce in any recipe that needs soy sauce, but in much smaller amounts as it is very concentrated.

Knorr liquid seasoning sauce is a dark condiment that can add boosts of flavor to your dish because it is salty with umami tastes.

However, Knorr liquid seasoning sauce has a more distinct flavor than soy sauce, so it may stand out in a recipe.

You may try to use Knorr liquid seasoning in recipes like stir-fries, fried rice, etc., that have a variety of flavors. That way, it will not overpower the whole dish. 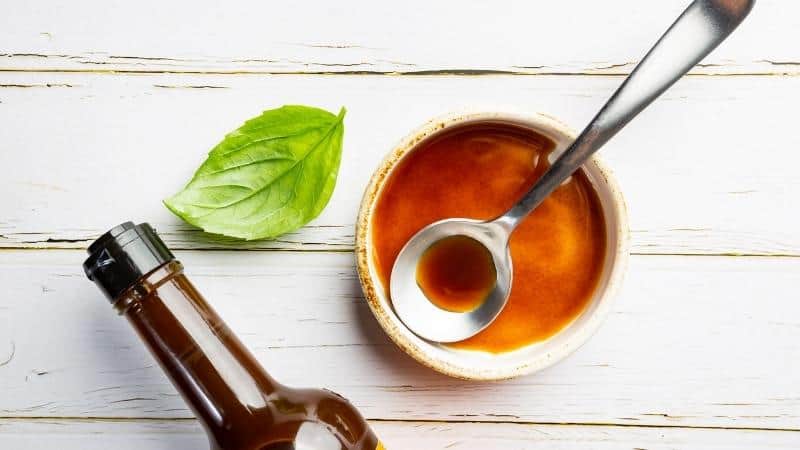 Worcestershire sauce is a salty and slightly savory sauce like soy sauce, making it ideal for seasoning food.

In particular, Worcestershire sauce is a good substitute for soy sauce in recipes that call for meat.

Being a fermented sauce made from many natural ingredients such as molasses, anchovies, vinegar, garlic, salt, and sugar, Worcestershire sauce has a very distinct flavor.

As a result, you may want to use less of it when replacing soy sauce to season food.

Similar to soy sauce, miso paste is also made by fermenting soybeans, but it is mixed with salt and grains, such as koji or barley.

Miso paste has a savory and salty flavor like soy sauce, and it can work as a replacement for soy sauce in many cases.

However, you need to mix the miso paste with liquid first, which is why it works best with sauces and soups.

Umeboshi vinegar is sun-dried and soured plums, also known as plum vinegar. It has very salty and tangy flavors with a hint of umami.

You can add a bit of umeboshi vinegar to dishes that lack salt, but they may still lack the complete flavor that soy sauce offers.

If you want to make your umeboshi vinegar taste better, you may mix it with some coconut or liquid aminos to make it more similar to soy sauce.

In recipes that need dark and complex flavors, balsamic vinegar can replace soy sauce but be sparing with it. You can also use a little if you just need to add color to your dish.

Apple cider vinegar tastes tarty with slight hints of apples, and it can only replace soy sauce in very specific situations.

For instance, apple cider vinegar can tenderize the meat and can replace soy sauce if you are only using soy sauce for that purpose.

However, you should only use a little apple cider vinegar and let it stay on the meat for about 20-30 minutes. You may also want to dilute it with water or rinse your meat well afterward.

Beef broth is a savory liquid that you can use in place of soy sauce, and many versions may be salty like soy sauce.

If you have liquid beef broth, it is best to use it in soups and sauces. On the other hand, if you have a beef bouillon, you can use half of the cube and mix it with a bit of water before adding it to your recipe.

Chili sauce will not have the same flavor profile as soy sauce because it is mostly spicy. It can also have other flavors like sweet or tangy depending on the variety.

However, it can work in certain dishes if you are missing some flavor. For instance, you can add chili sauce to noodles that taste bland because you don’t have soy sauce.

If all you need is saltiness in your dish then regular table salt can replace soy sauce in many dishes.

However, salt will not be a perfect replacement for soy sauce because it will not have the savory and umami flavor that soy sauce has.

Moreover, you cannot use salt in an equal ratio to soy sauce, you should only add a few pinches as needed.

Anchovies can occasionally replace soy sauce because they add great salty and savory notes, but they will not work for every recipe.

You can choose a few small anchovies and finely chop them up to create a paste. It would be best to mix this into curry or sauce to blend the flavor well.

Seaweed can replace soy sauce in some dishes because seaweed has natural salty and umami flavors like soy sauce.

However, seaweed is not a liquid and it will be more difficult to mix into your recipes. You will need to finely chop it but even then, it will still be visible in your dish.

If you cannot have wheat or soy and want a vegan alternative to soy sauce, you can whip up a recipe for vegan and soy-free soy sauce, and here’s how to make it.

Bring the mixture to a boil then lower the heat once it boils, simmering until it thickens and is reduced down to half.

Remove any solid particles from the mixture by straining the sauce. Let the sauce cool then bottle it and use it as soy sauce whenever you need it.

23. Make Your Own Soy Sauce

If you don’t have much available that will work for your recipe, you can add a few common pantry ingredients together to create a makeshift soy sauce.

Gently boil the mixture for 15 minutes until it reduces to around 1 cup.

If you cannot consume soy sauce or it is unavailable, you don’t have to worry because you can try any of the soy sauce alternatives listed above.

Some of the substitutes will not be a perfect replacement for soy sauce, but they will still add flavor to your recipes.