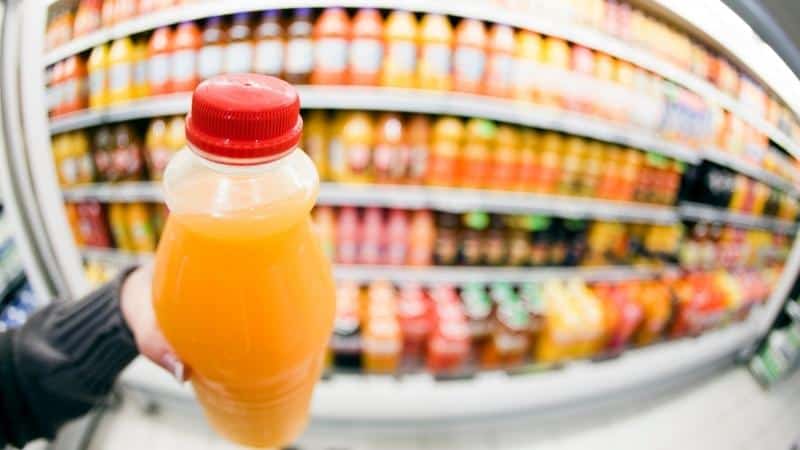 Orange juice is the most popular drink in the United States. It’s no surprise then that there are a number of brands dedicated to delivering the best version of this beverage.

To make things easier for you the next time you do your groceries, I’ve compiled a list of orange juice brands known for their reputation. Check them out below!

Tropicana is the leading refrigerated orange juice in the US and one of the most established brands worldwide.

It was started in 1947 by Anthony Rossi who moved to Florida and started selling sliced citrus gift boxes and orange juice to local stores.

Tropicana was later sold under the banner of PepsiCo and became a multi-million dollar enterprise specializing in different variants of orange juice.

Simply Orange juice belongs to the Coca-Cola Company based in Florida and was founded in 2001.

This brand prides itself in providing not from concentrate orange juice and is sourced from 100% fruit extracts.

Simply Orange juice contains no added flavors and additives. It is gently pasteurized to retain as much of the original flavor as possible.

What is added to the brand’s formula are the natural oils from the peels for additional orange taste and the pulp in certain variations.

Minute Maid is another native orange juice brand that has extended its reach worldwide. It was formulated in 1945 by the Florida Foods Corporation to help the soldiers in the ongoing WWII.

Although it was not administered to the front lines due to the war ending, it still gained renown for being the first-ever frozen concentrated orange juice on the market.

It earned the name Minute Maid due to its convenient preparation. It grew exponentially in the years that followed, becoming a household staple.

In 1960, the Coca-Cola Company bought Minute Maid and released several orange juice lines including home-squeezed, pulp-free, and those fortified with zinc, vitamin C, D, and calcium.

Florida’s Natural started off as a group of independent farmers aiming to grow the best citrus fruits in America. In 1987, they released their own official not-from-concentrate orange juice.

Since the brand sources its oranges from its very own groves, it has a unique marketing strategy of “we own the land, we own the trees, we own the company.”

This resonated well with consumers looking to support 100% local products to uplift the economy.

Bolthouse Farms orange juice is sourced from its groves in California and is advertised as another 100% orange juice not made from concentrate.

This variant is the only orange juice line offered by the company and is sold in big bottles measuring 52 oz.

Bolthouse Farms prides itself in using oranges that are homegrown and not genetically modified, as well as not adding sugar or preservatives.

This orange juice is also gluten-free and has a high amount of vitamin C enough to cover 100% of the recommended daily intake.

Natalie’s orange juice is made by a women-led company with the same name located in Florida.

This orange juice is made with a clean label, which means that its only ingredient is oranges and has no added sugars, GMO, or preservatives.

Oranges used in Natalie’s are sourced from local and regional farmers and manually squeezed daily in small batches.

These juice extracts are then subjected to gourmet pasteurization, exposing them to heat in minimal time and temperature as approved by the FDA.

Due to this, Natalie’s orange juice only has a shelf life of 30 to 45 days, unlike other brands that last for about 90 days.

However, Natalie’s is purer and retains most of the organic orange taste.

Uncle Matt’s is another Florida-based company that prides itself in being USDA certified organic, using natural products that contain no fertilizers or any chemicals involved.

Additionally, their orange juice line-up is not sourced from concentrate, is vegan-friendly, and is gluten-free.

Lakewood Organic is based in Miami and is well-known for its fresh-pressed not-from-concentrate orange juice contained in authentic glass bottles.

This orange juice is 100% unsweetened, non-GMO, has no added preservatives, is gluten-free, and is vegan-friendly.

Although Lakewood Organic does not add any chemicals to its orange juice or any product, the company ensures that all its juices are pasteurized.

Bottles of orange juice should be shaken before consumption, refrigerated after opening, and consumed within two weeks.

When the pressure is five times the amount of the deepest part of the ocean is applied to the juice, its flavor, color, and nutrients are retained. 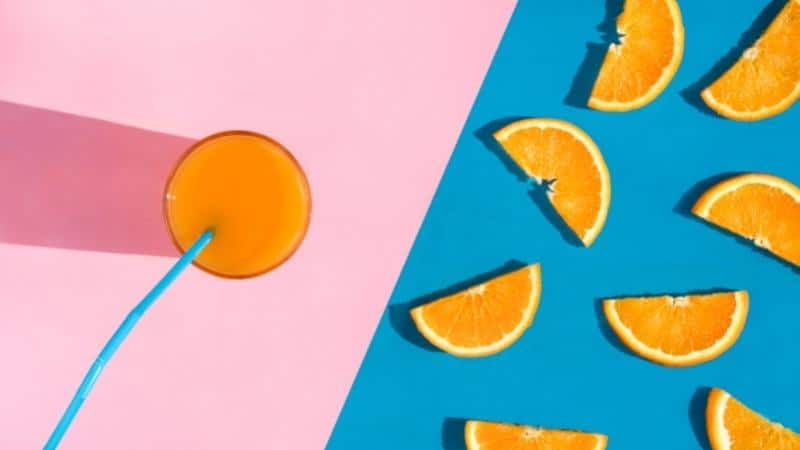 Naked Juice is another company owned by PepsiCo known for selling pure orange juice that is GMO-free, sugar-free, and has no preservatives in the formula.

Orange juice from this brand is known for its renewable bottle which can be processed to turn into another container.

In addition, Naked Juice offers a nature-friendly orange juice line-up that is vegan, including the orange-mango blend and 100% pasteurized orange juice.

SunnyD was started in 1963 by Florida dads with the aim of creating the most delicious and unique orange beverage on the planet.

Their orange juice is a fruit-flavored drink that is gluten and caffeine-free with a few artificial sweeteners in the formula.

Several orange juice variants can be found in the collection of SunnyD fruit juices including smooth orange, tangy original, and even orange juice mixed with pineapple or mango.

These flavors are available not only in America but also in the United Kingdom.

Old Orchard started in Michigan in 1985 and grew to become a state-of-the-art facility producing gluten-free, no preservative fruit beverages, including those made from orange juice.

Additionally, Old Orchard is the third-largest producer of frozen concentrates in the USA and the ninth when it comes to making bottled juice.

There are a lot of orange juice varieties offered by Old Orchard ranging from organic ones, juice cocktails, frozen concentrates, 100% juice blends, to those fortified with calcium.

All these orange juice products are pasteurized while some of them are Kosher certified.

Welch’s is a global brand that sells fruit juices including orange juice in the United States and across 35 countries worldwide.

Fruits used are sourced all over family farms over the state and the resulting products are caffeine-free with no MSG added.

Welch’s offers orange juice in many forms including 100% orange juice from concentrate, orange juice mixed with apple or pineapple in the form of juice drinks, and refrigerated beverages.

Tampico began by selling one single product called the Citrus Punch in 1989 and has since grown to become a worldwide supplier of concentrates in over 50 countries.

Other orange juice variants include the zero sugar citrus punch, and the paired-up carrot on with a blend of orange, peach, and pineapples.

Tang is a powdered drink mix brand launched in 1957 and adopted as NASA’s official drink for the Mercury and Gemini missions paving the way for its explosive growth.

It reached success in more than thirty countries worldwide and holds the top spot in the orange juice markets of Brazil, Argentina, and the Philippines.

This brand has a lot of flavors to offer but the orange juice variant remains the best-selling one due to its history and convenience of preparation.

Founded in 1960, Sula is the largest food and beverage distribution company located in Honduras.

As a multinational company, Sula sells fruit juices not only locally but also to El Salvador, Dominican Republic, Guatemala, and Central American countries.

This Honduran franchise has several orange juices for sale in the market including Fristy orange-flavored beverages available in pet plastic bottles with a shelf life of six months.

Tree Ripe orange juice was manufactured in 1995 under private enterprise Johanna Foods which has expanded into one of the largest producers of fruit beverages.

With the company’s advanced manufacturing systems and state-of-the-art facilities, it has the most advanced chilled juice plant in the United States.

Several premium juice options are available in the East Coast market, such as the Tree Ripe natural, with pulp, fortified with calcium, vitamins A, C, D, and E, and the organic orange juice variety.

These juices are vegan-friendly and contain no animal ingredients.

Every serving of this orange juice is guaranteed to have no added sugar or preservatives while still being rich in vitamins and nutrients.

In addition, HomeMaker Premium’s orange line is gluten and dairy-free ranging from its OJ with no pulp, fortified orange juice enriched with calcium and vitamin D, to its pulp variety as well.

Good and Gather is Target’s largest-owned brand that poses as a flagship store for over 2,000 products, including orange juice that is made with natural ingredients and no artificial additives.

Their orange juice brand does not contain any of the eight major allergens, is made from 100% juice, and some lineups are even kosher certified.

Nestlé is a Swiss conglomerate known as the largest food manufacturer across the globe, even involving itself in the tea and juice industry.

Its juice variants are served in powdered form, available only in 200g packaging, and have a shelf life of 12 months.

In particular, Nestlé orange juice is made from the real orange flavor and advertised as a versatile premium powder that can be mixed with other Nestlé variants.

Del Valle is a Mexican producer of fruit drinks, nectars, and juices founded in 1947 by the Coca-Cola Company as part of their Latin Center family brands.

It is the top producer in Mexico and exports its products to countries like Colombia, Brazil, and others located in Central America.

Del Valle has diverse fruit beverage options. The orange juice line, in particular, can be bought with pulp, without pulp, frozen OJ concentrate, and those mixed with several other berries.

Organic Valley is an agricultural cooperative made through the efforts of several farmer families in Wisconsin marketing their products as 100% organic and humane.

Aside from animal byproducts such as milk, cheese, and protein shakes, this brand extended its fruit juice line.

They offer several orange juice varieties ranging from those with pulp, without pulp, to fortified with calcium that is all pasteurized, made from 100% premium oranges without any pesticides.

These orange juice products are minimally processed without any added preservatives or sweeteners in the mix.

Del Monte started in 1886 and became well-known as a producer of premium products including pure juices, nectars, and fruit drinks packed in cans, cartons, plastic, or glass bottles.

This brand is known as the original plant-based food company which guarantees that your fruit juice is sourced from fresh organic fruits.

Several lines have been released over the years, including variants sold as pure orange juice, the Gold version which is made from concentrate, and the top bar range which is OJ in a can.

There are plenty of orange juice brands in the industry that have succeeded in dominating not only the local market but the global production as well.

Natalie’s, Florida’s Natural, and Uncle Matt’s are also relevant in the fruit juice market, joined by other big-name company subsidiaries such as Evolution Fresh, Naked Juice, and Good & Gather.