Since flour is a popular ingredient around the world, many countries have their preferred type of flour. For instance, maida flour is a very popular flour variant in India, and maida flour is commonly used in most Indian recipes.

If you want to make a recipe that needs maida flour but you do not have any, you may be looking for maida flour substitutes. I looked up the facts, and here are some great maida flour alternatives you can try!

Coconut flour can make a decent substitute for maida flour, especially if you are allergic to gluten because coconut flour does not have gluten. Generally, you can use coconut flour for recipes like pancakes, cake, bread, and more.

However, coconut flour not having gluten will make it have a lot less structure than maida flour. Therefore, you may want to add extra baking powder or an egg to add structure to your dish.

If you want to use almond flour in a recipe, it may be best to reduce how much fat or oils you use. Almond flour is naturally rich in fat, so your dish may become too fatty if you add the normal amount of oils or fat.

Tapioca flour is made from cassava starch and tastes very mild. However, it is not ideal to use tapioca flour by itself in a recipe to completely replace maida flour.

If you want another gluten-free alternative to maida flour, one of your best bets is buckwheat flour. Despite having the word “wheat” in its name, buckwheat is naturally free of gluten.

Typically, you can switch maida flour with ragi flour with little to no issues. However, some people like to mix ragi flour with whole wheat flour to enhance the texture, which will make the dish not gluten-free. 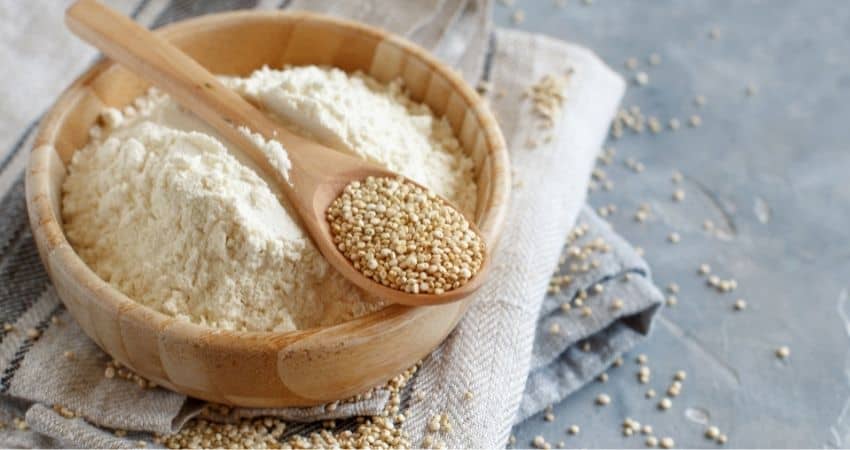 If you want a maida flour alternative that is low in the glycemic index and gluten-free, quinoa flour is a good choice. Quinoa flour is made from ground quinoa seeds.

It is important to note that quinoa flour has a rather bold flavor. Quinoa flour tastes a bit bitter and almost like grass compared to maida flour, which tastes a little sweet.

Generally, quinoa flour is best used to make baked goods. However, it would be wise to mix quinoa flour with another type of flour like buckwheat flour to give your dish more structure.

If you want a gluten-free and grain-free alternative to maida flour, soy flour can work. Normally, soy flour is created from ground full-fat and dehulled soybeans and has a texture similar to flour, but soy flour tends to be a bit coarser.

However, soy flour is rarely used by itself to make recipes. Generally, soy flour is added as a supplement to other types of flour before being used in a recipe.

Usually, banana flour makes dishes very moist. Moreover, you may want to add applesauce or eggs to help the banana flour bind to other ingredients.

Normally, you can use cake flour in an equal ratio to maida flour. However, you may also mix cake flour with a higher-protein flour like bread flour if you want a heavier texture.

Is Maida Flour The Same As All-Purpose Flour?

Is Maida Flour The Same As Cake Flour?

Generally, maida flour can be considered the same as cake flour. Maida flour is wheat flour that is very similar to cake flour sold in the United States.

Other than cake flour, there are many substitutes for maida flour that you can use. Some common alternatives to maida that you can try include almond flour, coconut flour, buckwheat flour, and more.