Since Jell-O was launched in 1897, Jell-O has greatly influenced how Americans cook and present several dishes and desserts.

With such success, it is no wonder that Jell-O has ventured to create several flavors over the years. While some flavors have been discontinued, many Jell-O flavors have proven to be crowd favorites.

If you are wondering what Jell-O flavors are available in the market today, it is good to remember that Jell-O goes by twenty-two staple flavors, and here is a complete list of Jell-O flavors.

Jell-O Apricot was launched somewhere between 1975 and 1978 around the same time that Jell-O Peach and Jell-O Blackberry made a comeback in the market.

Additionally, Jell-O Apricot is a popular flavor when making Jello salad and can be served plain, topped with whipped cream, or garnished with fresh apricot wedges.

Like Jell-O Apricot, the majority of Jell-O Berry Blue’s ingredients are sugar and gelatin.

Additionally, Jello-O Berry Blue uses Blue 1, which is a food color usually derived from an oil base and coal tar.

Furthermore, Jell-O Berry Blue is a popular flavor for children’s desserts and party food like Jello shots because of its bright blue appeal.

Jell-O Blackberry Fusion, which is an infusion of raspberry and blackberry flavors, was launched between 1961 to 1964 along with other mixed fruit flavors.

Additionally, Jell-O Blackberry Fusion is gluten-free even if there is no gluten-free certification on the packaging.

Jell-O Black Cherry was launched in 1956 alongside the imitation grape and raspberry flavors. During that time, imitation flavors were looked upon favorably.

Jell-O Cherry was launched in 1906 alongside Jell-O Chocolate. However, unlike Jell-O chocolate which was discontinued in 1931, Jell-O Cherry remains in production to this day.

Just like Jell-Black Cherry and Blackberry Fusion, Jell-O Cherry is made with Red 40 and Blue 1 coloring to achieve a cherry-like color.

Furthermore, Jell-Cherry comes in a sugar-free format and is considered a gluten-free product.

Jell-O Cranberry was launched in 1994 at the same time that Jell-O Grape was reintroduced to the market.

Additionally, Jell-O Cranberry is widely used on holidays like Thanksgiving to make Jello salad or as an ingredient to other cranberry-flavored desserts.

Jell-O Fruit Punch does not specify the type of fruit punch it is trying to imitate or the main flavor it is supposed to have.

Based on the packaging, Jell-O Fruit Punch could be inspired by the flavors of cherry, pineapple, and orange.

Unlike what the name may suggest, Jell-O Fruit Punch does not contain alcohol and is safe for children to consume.

Jell-O Grape came out in 1956 and was originally branded as an imitation flavor alongside Jell-O Black Cherry and Jell-O Black Raspberry.

Eventually, Jell-O Grape grew out of its imitation brand and became one of the staple flavors of Jell-O.

Additionally, Jell-O Grape is made with Blue 2 and Red 40, which are plant-based indigo and a petroleum-based food dye respectively.

Jell-O Lemon was introduced in 1897 and is one of the four original flavors created by Jell-O inventor Pearle Wait.

To achieve the bright yellow appeal of Jell-O Lemon, Yellows 5 and 6 are used, which are both derived from petroleum products.

Just like all the other red-colored Jell-O flavors, Jell-O Cherry Lemonade uses Red 40 and Blue 1.

In 1930, Jell-O Lime was launched and Jell-O Lime became such a huge hit among housewives and cooks.

Part of the reason for Jell-O Lime’s popularity is because of the ongoing Jello salad trends of the time and partly because Jell-O Lime came with a recipe book.

Additionally, Jell-O Lime has an appealing green color achieved through the use of Yellow 5 and Blue 1.

Apart from Jello salads, Jell-O Lime is a top choice when it comes to key lime pie.

Jell-O Mango is one of the more recent flavors introduced, but quickly Jell-O Mango became in high demand for desserts like mango jelly and Jello pudding.

Like Jell-O Lemon, Jell-O Mango uses Yellow 5 and 6 to get its color. Moreover, Jell-O Mango is known for its excellent imitation of the taste of fresh mango. 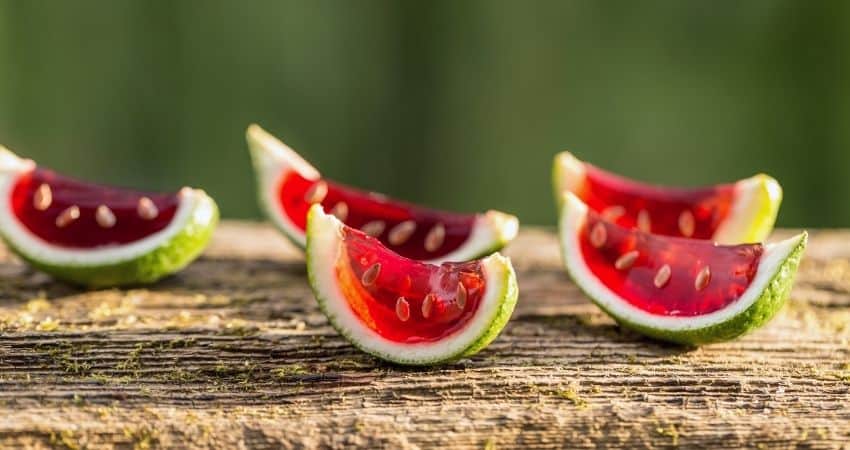 Jell-O Watermelon was introduced in 1993, right after Jell-O Blue Berry was launched and right before Jell-O Cranberry entered the market.

Due to Jell-O Orange’s popularity, Jell-Orange comes in a sugar-free form and a ready-to-eat format.

Additionally, Jell-O Orange has the bright orange appeal of real orange fruits, which is achieved through the combination of Yellow 6 and Red 40 food dyes.

Jell-O Peach was introduced to the market in 1907 as one of the new flavors that were hoped to strengthen Jell-O’s success.

However, in 1920, Jell-O Peach had to be discontinued for reasons possibly connected to low demand.

Nonetheless, between 1975 and 1978, Jell-O Peach made a comeback and has continued to be in production to this day.

Jell-O Blueberry Pomegranate is another fusion flavor by Jell-O that outshined plenty of other flavors, most of which were discontinued over the years.

As its name implies, Jell-O Blueberry pomegranate is an interesting combination of the flavors of blueberry and pomegranate and colored with Red 40 and Blue 1.

Similar to other Jell-O flavors, Jell-O Island Pineapple is artificially flavored to taste like pineapples and uses Yellow 5 and 6 to get their golden color.

Jell-O Raspberry was introduced in 1897 alongside the three other original Jell-O flavors.

Like Jell-O Watermelon, Jell-O Raspberry uses only Red 40 as its food dye.

Like Jell-O Raspberry, Jell-O Strawberry was launched in 1897 as one of the four original Jell-O flavors.

While some of the strawberry-flavored Jell-O has been discontinued, the original Jell-O Strawberry remains a staple in the Jello market.

Jell-O Strawberry Banana was launched between 1961 to 1965 alongside numerous fruit fusion flavors, including lemon-lime, pineapple-grapefruit, and orange-banana.

Jell-O introduced tropical blends in the market in 1996 to appeal to the Hispanic market. However, it is unclear whether Jell-O Tropical Fusion was included.

Based on the packaging, though, it is reasonable to assume that the flavors are cherry, pineapple, and orange, similar to Jell-O Fruit Punch.

Jell-O Melon Fusion is one of the more recent flavors introduced to the market.

While Jell-O Melon Fusion does not say exactly which melon flavors it is mimicking, the packaging does include a small picture of a watermelon, a melon, and a honeydew.

Additionally, Jell-O Melon Fusion does not feature a primary flavor, but the Jello itself is green and is colored using Yellow 5 and Blue 1, which may indicate honeydew as the main flavor.

Check out our other articles to find out the types of Jello, if you can leave Jello out of the fridge, and Jello brands.

Jell-O has introduced over two dozen flavors to the market since Jell-O’s launch in 1897. While most of the flavors were discontinued, some flavors remain in production due to popular demand.

Moreover, all the Jell-O flavors are artificially flavored and contain similar ingredients with the main difference being their food dye and preservatives.