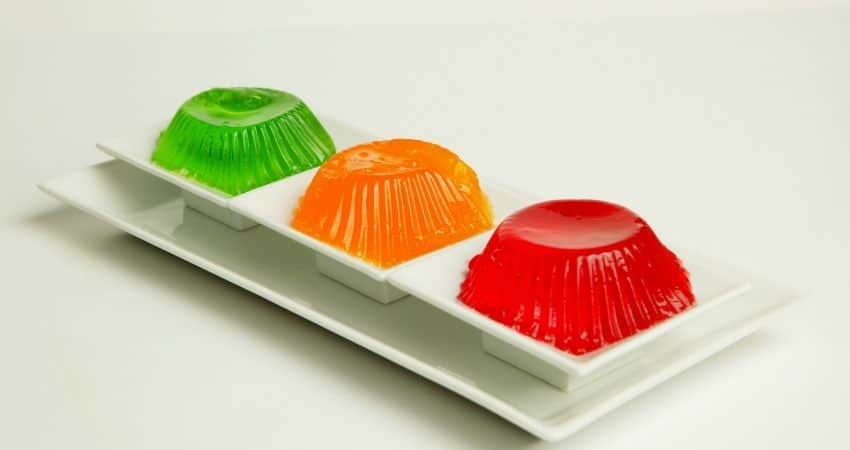 When you first learned that the gelatin in Jello is derived from animals, you might have if Jello is made out of bones. I looked into it, and here is what I found!

Is Jello Made Out Of Bones?

Jello contains gelatin, which is made from animal parts like skin, tendons, ligaments, and bones. Sometimes, gelatin is derived only from bones, but usually, gelatin is produced from a combination of bones and skins. Additionally, it is a myth that cow and horse hooves are used to create Jello, as hooves typically produce keratin and not collagen.

In case you are curious to learn more about what animals Jello is made of and which animal parts are used, keep reading!

Does Jell-O Have Pork Bones In It?

Currently, the gelatin in Jell-O is made mostly from pigskin. However, pig bones and other pig parts may be also used to make Jello.

Additionally, there is no way to confirm whether Kraft Foods used to source most of their gelatin from pig bones in the past before making pig skin their primary gelatin source.

As for other Jello brands, Jello brands sometimes use a combination of pig and cow bones to produce the collagen that makes the gelatin.

Is Jell-O Made From Dog Bones?

There are no known brands that use dog bones to produce gelatin, and there are not any known attempts to prove whether dog bones are suitable sources of gelatin.

Cows and pigs are industrially acceptable sources of gelatin. As such, brands like Jell-O have always used pigskin and other pig or cattle parts, not dog bones.

Typically, gelatin manufacturers use leftovers from the meat industry such as skin, bones, and hides because slaughtering and consuming dog parts are considered illegal in most places.

Is Jell-O Made Out Of Chicken Bones?

While chicken bones are not the most common sources of gelatin, it is possible to produce high-quality gelatin from chicken bones because industrially raised chickens have rich marrows.

Is Jell-O Made Of Horse Hooves?

Jell-O and other Jello brands are not made from horse hooves. Unlike animal bones, hooves do not produce collagen, which is the key element in gelatin.

Instead, hooves produce keratin, and gelatin cannot be derived from keratin.

Is Jello Made From Cow Hooves?

Similar to horse hooves, cow hooves do not produce collagen so without collagen, gelatin cannot be created.

Additionally, cow hooves are known to make keratin and while collagen and keratin are both proteins, keratin cannot be used to create gelatin.

Is Jello Made From Beef Gelatin?

Some Jello brands are made from beef gelatin, which is a powder supplement mostly derived from the skin and hair of cows.

Moreover, there is also beef gelatin that comes from cow bones. Sometimes, manufacturers create gelatin derived only from one cow part or a combination of two or three parts.

Is Jello Made Out Of Bone Marrow?

Jello may contain gelatin that is sourced from the bone marrow of animals like pigs, chickens, and cows although the gelatin industry generally uses pigs and cows.

With the large amounts of collagen stored in the bone marrow of pigs and cows, cow and pig bones are considered ideal sources of gelatin.

Is Jello Made Out Of Pig Feet?

Unlike cow and horse hooves, pig feet do have collagen that can produce gelatin. However, pig feet are not a popular source of gelatin for Jello.

Currently, pig and cowhides and bones are the preferred sources of gelatin, and there are no known Jello brands that claim to use pig feet.

Is Jello Made Out Of Pig Fat?

Gelatin is not made out of pig fat and Jello does not typically have other ingredients that come from pig fat.

Moreover, both gelatin and Jello do not contain any fat whatsoever since Jello and gelatin do not require fat to be made.

Is Jello Made Out Of Fat?

Jello is not made from the fat of any animal because fat cannot produce collagen, which is the protein essential in creating gelatin.

Is Jello Made Out Of Meat?

While the gelatin in Jello is animal-based, the gelatin does not come from meat. Instead, gelatin is derived from the bones and skins of animals after the meat is removed.

Consequently, gelatin manufacturers tend to source the bones and hides they need from the slaughterhouses of the meat industry, which typically have no use for animal bones.

Is Jello Made Out Of Bugs?

Jello is not made of bugs. Gelatin, the main ingredient of Jello, is produced from pigs and cattle because while bugs can produce collagen, bugs are not economically viable.

Additionally, pigs and cattle are more accessible than bugs. Nonetheless, bugs are often used as a food dye, so some Jello brands may use bug-based food dye.

Is Jello Made From Human Bones?

Jello is not made from human bones, as that would be illegal and widely criticized. Nevertheless, it is possible to make gelatin from human proteins, and it has been done.

However, gelatin derived from human proteins is not being used in the food industry. Instead, it is being studied to come up with safer gelatin consumption in medicines.

Is Gelatin Still Made From Animals?

Most of the gelatin in the market and those used in Jello still come from animals. However, vegan gelatin substitutes like agar-agar and vegetable gum are growing increasingly popular.

What Part Of Pig Is Gelatin?

Take a look at our other articles to find out if Jello is pork, if Jello is good for your hair, and if Jello pudding is gluten-free.

Most commercial Jello today are still made out of animal bones and two of the most common sources of gelatin are the bones of cows and pigs although chicken and fish can also be used.

Additionally, it is not true that gelatin is derived from cow and horse hooves, bugs, dog bones, and human bones.