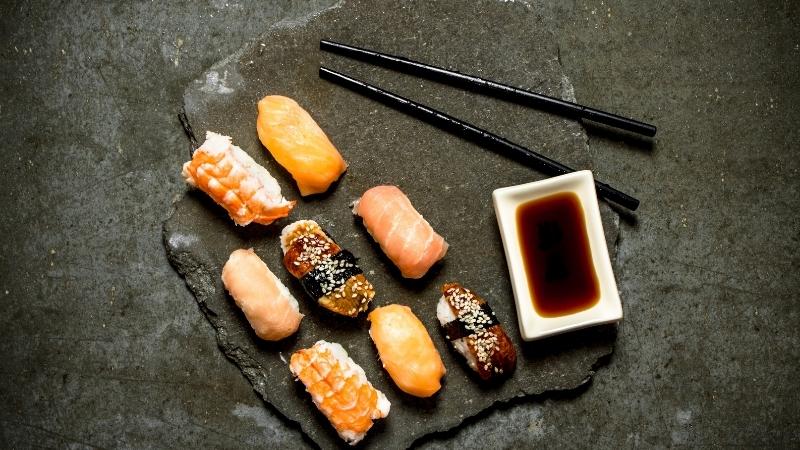 Soy sauce is an excellent, versatile sauce that can be used as a seasoning when cooking or as a dip for other food. One of the most popular of such pairings is sushi dipped in soy sauce.

With so many types, you’re probably wondering which is the best soy sauce for your sushi. I did the research so don’t have to. Here is what I found!

Kikkoman soy sauce is one of the most popular soy sauces available and is a common choice for pairing with sushi.

It has the traditional salt, umami, and bitter flavors we expect from soy sauce but with an obvious sweetness to boost sushi’s taste.

However, Kikkoman light soy sauce is particularly the best choice from this brand as it has a subtler and milder taste to enhance sushi’s flavors without overpowering the sushi.

Kishibori Shoyu is an artisanal soy sauce that is made using traditional soy sauce brewing methods from Japan.

This artisanal sauce gets its distinct flavor from high-quality ingredients being fermented for a year in century-old cider barrels.

Kishibori Shoyu features a very rich flavor profile, giving you obvious yet not overpowering umami and sharp yet subtle flavors.

If you want another soy sauce like Kikkoman that is easy to find, Lee Kum Kee Premium Soy Sauce makes an excellent choice to use for your sushi.

Lee Kum Kee Premium Soy Sauce has a more complex texture than Kikkoman and it is saltier than it is sweet, but it is not bitter.

However, it will not be ideal for complex sushi rolls with lots of flavors because it can overpower the sushi.

Whiskey Barrel Aged Shoyu Soy Sauce is another kind of artisanal soy sauce that will perfectly pair with sushi.

This soy sauce has a mellow and subtle flavor that has a less salty, more complex taste than other soy sauces but it still features a well-balanced and delicious flavor.

Moreover, Whiskey Barrel Aged Shoyu Soy Sauce has a bit of sweetness that many people enjoy but that will depend on your preference.

Yamaroku Soy Sauce is an artisanal soy sauce that boasts a mellow yet rich flavor that works perfectly with sushi.

This soy sauce has subtle flavors that will elevate the taste of sushi so it will not drown out its flavors.

However, it can be very difficult to find this soy sauce as it is aged in specialized barrels for 4 years and only less than 1% of soy sauces are created this way.

If you want something to add more flavor to your sushi, black garlic shoyu soy sauce is an excellent and trendy dip to try.

Black Garlic Shoyu Soy Sauce is not a traditional soy sauce because it boasts a mixture of garlic and soy sauce flavors in one.

This sauce perfectly balances the flavor of garlic and soy sauce but you can easily tell the tastes apart.

Moreover, this infused soy sauce is great if you want to add casual earthy flavors to your sushi but it is not a good option if you want to make the sushi stand on its own.

The delicious taste of Black Garlic Shoyu Soy Sauce can easily overpower any sushi which is a downside if you want to appreciate the full flavor of the sushi. 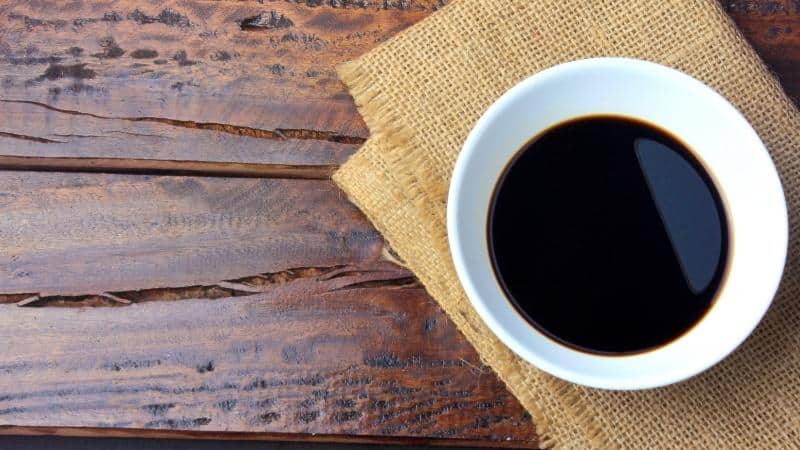 Pearl River Bridge Superior Dark Soy Sauce is a Chinese soy sauce that can be used for sushi if you want a change from Japanese soy sauce.

This Chinese soy sauce features an earthy flavor that isn’t as sweet as most Japanese soy sauces, focusing more on a salty flavor.

Pearl River Bridge Superior Dark Soy Sauce is a great option if you want a distinct and stronger soy sauce to dip your sushi.

Is It Important To Choose Good Soy Sauce For Sushi?

For instance, most people will opt for Kikkoman soy sauce because it is commonly used in Japanese restaurants and gives sushi a more authentic taste.

However, other people may prefer a more unique taste to their sushi and go with the less traditional Black Garlic Shoyu Soy Sauce.

Do I Need Soy Sauce For Sushi?

Traditional sushi typically does not need soy sauce because most Japanese foods focus on elevating simple flavors. As a result, soy sauce is not required but it will often accompany sushi.

However, soy sauce can be a great way to enhance sushi and add more flavors if you want to experience more complex tastes.

Do I Dip The Rice Or The Fish Into Soy Sauce?

In Japan, people often dip their fish into soy sauce when they eat sushi, making sure it does not get into the rice.

Dipping your rice first can overwhelm the flavor of the sushi with soy sauce because the rice will absorb a lot of it.

Moreover, the soy sauce can soak your rice, making your sushi break apart after dipping.

Putting your fish into sushi first will give you a smaller amount of soy sauce, offering you the flavor without overpowering or breaking your sushi.

Is It Rude To Put Wasabi Into Soy Sauce?

It can be considered rude by some people to put wasabi into your soy sauce when you eat sushi.

Traditionally, you should put a bit of wasabi on top of your sushi then dip your sushi fish-side-down into the soy sauce.

While some people may not care if you add wasabi into your soy sauce, it is proper manners to place wasabi on your sushi.

Soy sauce is an excellent way to enhance the flavor of sushi but it can be difficult to choose from the many options available.

For your convenience, you can pick a soy sauce that is best for sushi from any of the 7 options listed above!